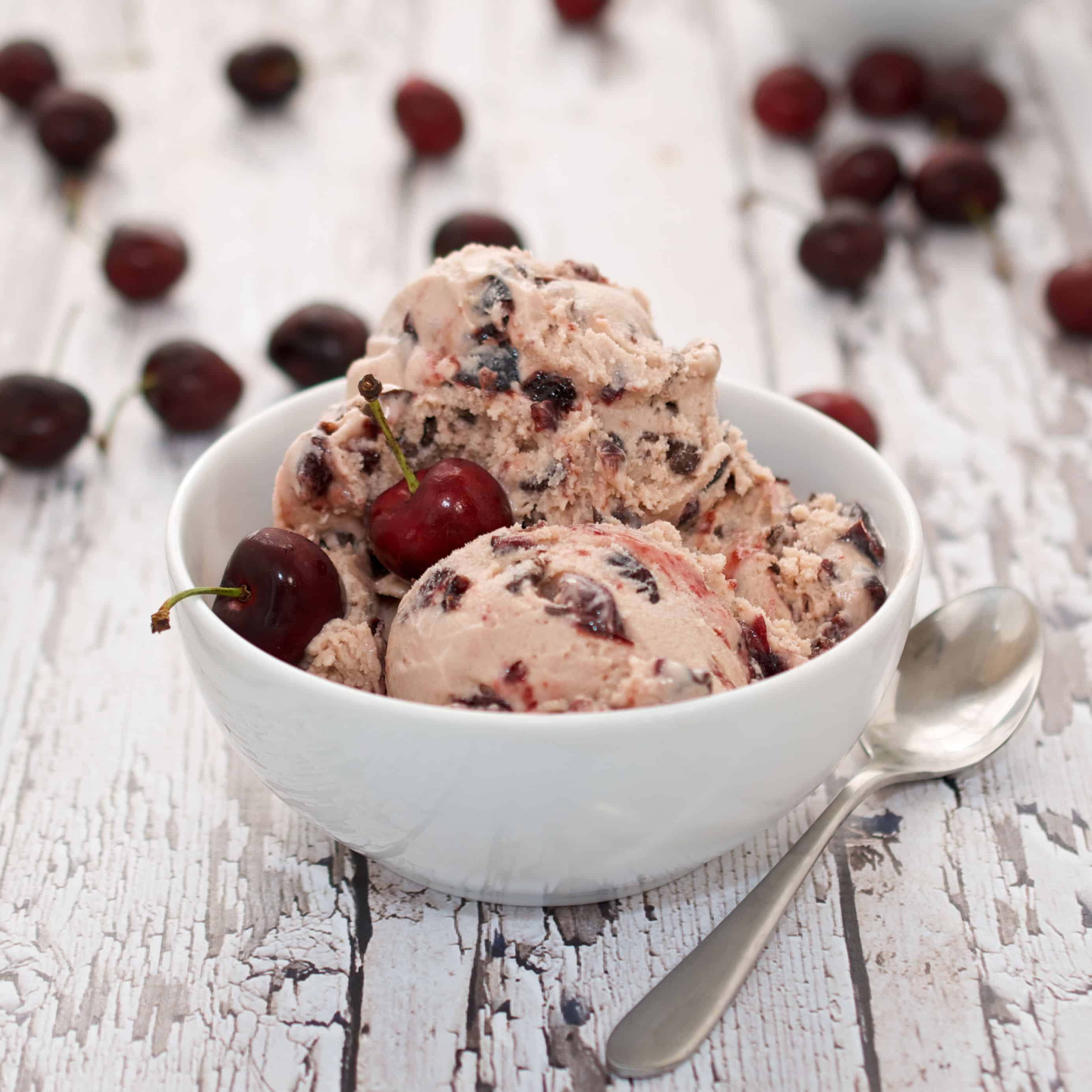 Black Cherry Chocolate Ice Cream is the indulgent dessert that you’ve been craving. Filled with lots of fresh cherries, chocolate chips, and creamy goodness in every bite. Serve this black cherry ice cream for dinner parties or as a treat to cool off with.

If you can’t tell by all of the ice cream recipes that I have on my blog, ice cream is my weakness. I can pass up just about every other dessert, but if there’s ice cream-it’s over! :)During the summer months, there is usually a constant supply of homemade ice cream in my freezer. Every summer, I set out to try every ice cream recipe that I have bookmarked over the cold winter months. This was one of the first ice cream recipes that I set out to recreate as soon as the cherry season arrived. I’m a huge fan of the chocolate and cherry combo, so when I took my first bite of Graeters Black Cherry Chocolate Chip Ice Cream, I was in heaven. I had to recreate it in my own kitchen!

Loaded with chunks of fresh cherries and rich chocolate chunks in every bite, this ice cream is a cherry lover’s dream! As soon as I tasted one bite, I knew it was a winner. In fact, Andrew declared this ice cream his absolute favorite (of course; he said that about the Mocha Chip as well! 😉 ). If you haven’t bought an ice cream maker yet, you really should! Nothing is as good as homemade!

What Kind of Cherries To Use

We use black cherries for this recipe, but you can use a variety of other cherries depending on what you like the best. Bing Cherries are lovely and flavorful options as well. You should taste test a variety of cherries to see what you like, then add your favorite to the ice cream.

The most important thing to consider when storing homemade ice cream is using a container that has a tight-fitting lid. If the lid doesn’t fit well, it can’t effectively keep the ice cream cold enough. They make many contaienrs that are intended for storing ice cream. I highly recommend investing in some of those containers to keep your ice cream in the best condition possible. 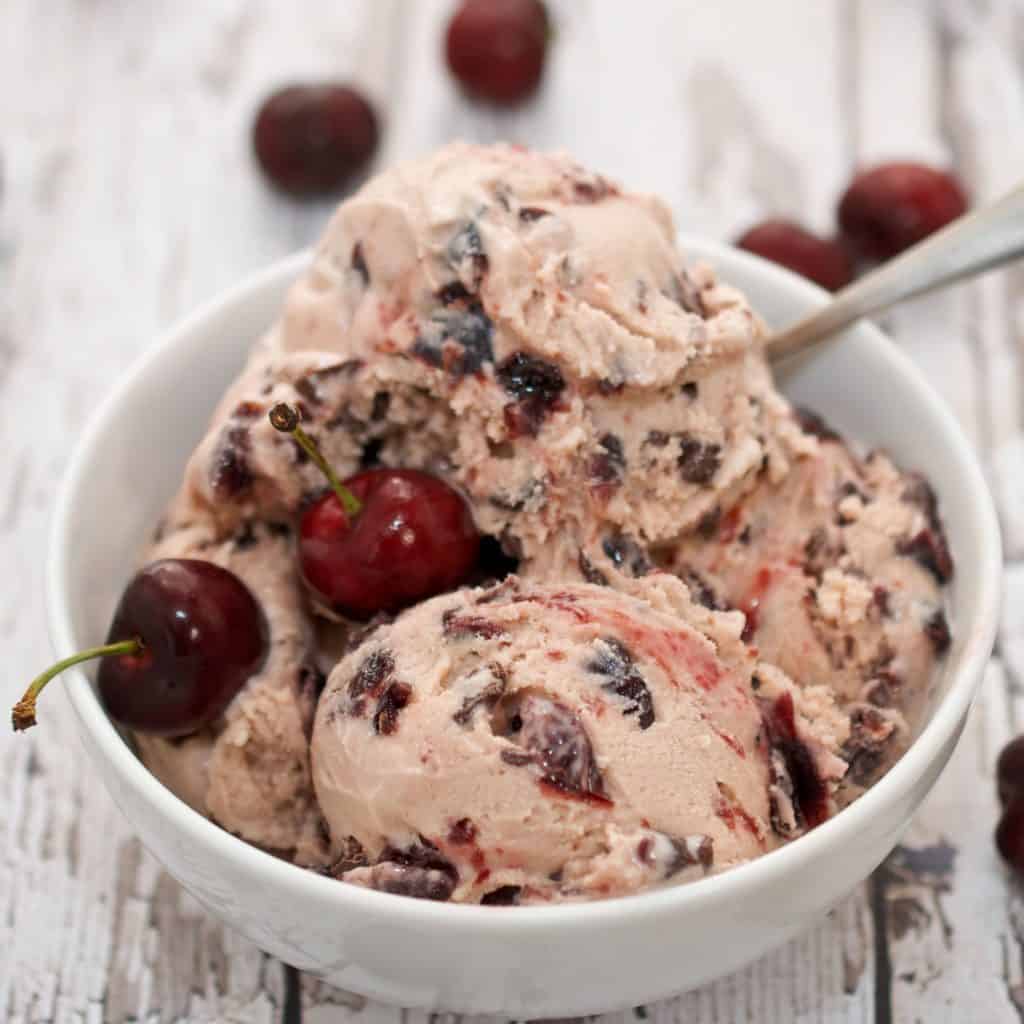 Freezer burn is a pain and makes your ice cream go bad so quickly.

First Step: Begin by mixing the cherries and 1/4 cup of the white sugar in a small saucepan. Heat over medium heat for around 8 minutes or until the sugar has dissolved. The sauce should have thickened some while heating. Allow it to cool.

Second Step: Put a medium-sized bowl in a container that has ice water.

Third Step: Using medium heat, warm the milk, 1/2 cup of sugar, and heavy cream in a medium saucepan. Heat until you notice steam appearing, and the temperature reaches 175 degrees.

Fourth Step: During the time the milk is warming up, combine the yolks and white sugar in a separate bowl. Whisk around 1 cup of the hot milk mixture into the egg yolks in order to temper them.

Fifth Step: Add the tempered yolk into the hot milk mixture. Continue to heat the custard using medium heat until it’s hot and reaches around 180 – 185 degrees.

Sixth Step: Pour the custard into the bowl that has been chilling over ice and let cool. Stir occasionally for ten minutes. Take the custard out of the ice bath and drizzle in vanilla. Cover it tightly with a piece of plastic wrap and refrigerate for 4 hours up to 24 hours.

Seventh Step: Right before churning the ice cream, put the ice cream in a medium sized bowl. Heat over a saucepan with water that is barely simmering. Heat the mixture until the chocolate has melted and can be whisked smooth. Add in the oil and stir. Pour the mixture into a ziplock bag.

Ninth Step: Put the ice cream into an airtight container. Cover it well and freeze for 3 hours or until firm. 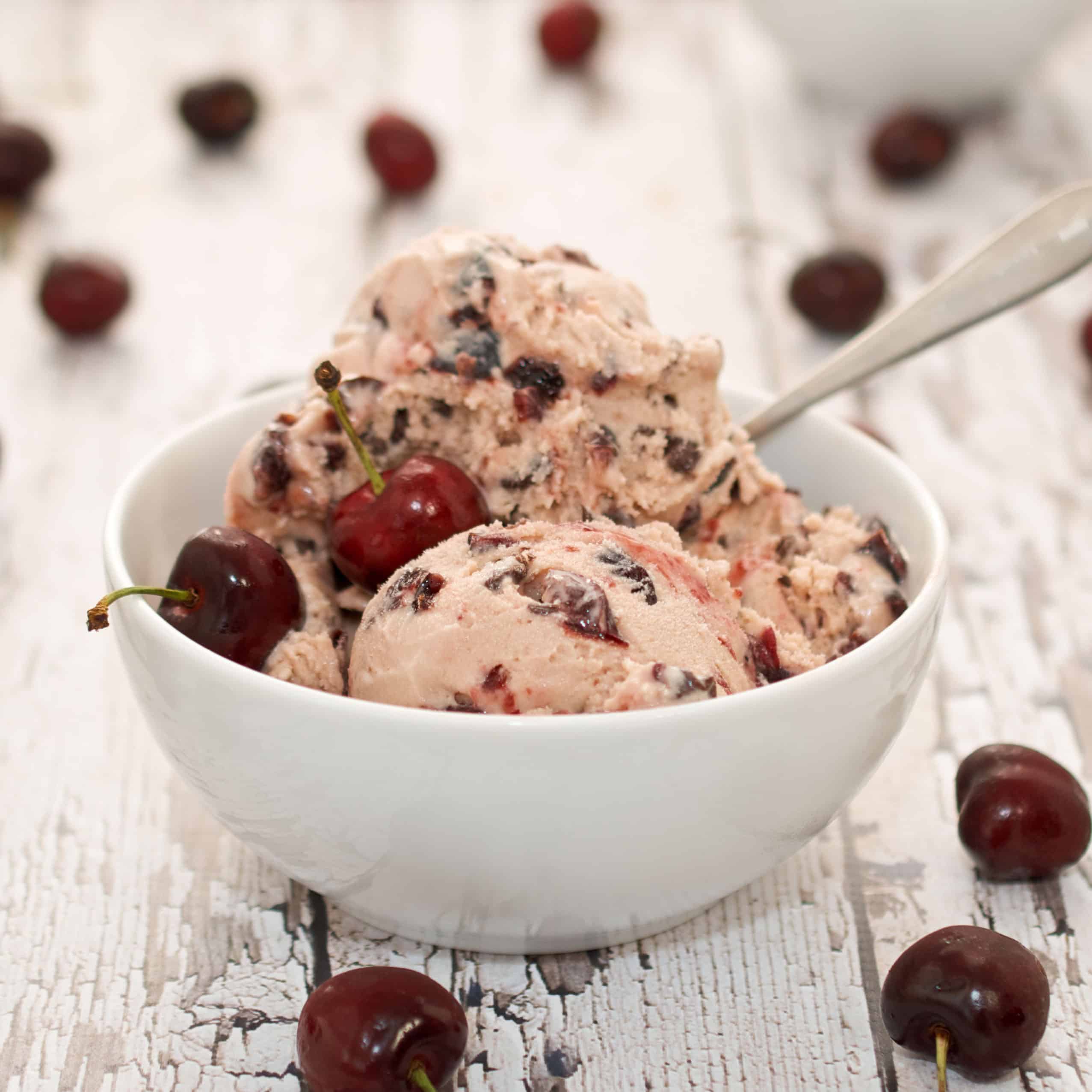 I have many tasty ice cream recipes for you to try. Let’s take a look:

In a small saucepan, stir together the cherries and 1/4 cup of the sugar. Simmer over medium heat about 8 minutes or until the sugar dissolves and the sauce thickens slightly. Let cool.
Set a medium sized bowl over a large container of ice water.
In a medium saucepan over medium heat, heat the milk, cream and 1/2 cup sugar stirring occasionally, until steam appears and the liquid is hot (175 degrees) about 5 minutes.
When the milk mixture is cooking, in a separate bowl, whisk the yolks and 1/4 cup of sugar together until smooth. Slowly whisk about 1 cup of the hot milk mixture into the yolks to temper them. Then slowly whisk the tempered yolk mixture back into the remaining hot milk mixture. Continue to cook the custard mixture over medium heat until it is very hot but not simmering (180-185 degrees). Immediately pour custard into bowl set in the ice bath and let cool, stirring occasionally, for about 10 minutes. Remove the custard mixture from the ice bath. Stir in vanilla extract. Cover tightly with plastic wrap and refrigerate until very cold (40 degrees), at least 4 hours and up to 24 hours.
A few minutes before you plan to churn the ice cream, place semisweet chocolate in a medium heatproof bowl. Set bowl over saucepan containing barely simmering water; heat mixture until chocolate is melted and whisk until smooth. Stir in oil and transfer to a ziploc bag; set aside.
Pour the mixture into the ice cream canister and churn following the manufacturer’s instructions until the mixture resembles the consistency of thick whipped cream. Add the cherry mixture. A Snip the corner of the ziploc bag that the chocolate is in, and while the machine is running, slowly drizzle the chocolate into the ice cream. After chocolate is added, continue churning until the mixture resembles soft served ice cream.
Transfer the ice cream to an airtight container. Cover the container and freeze the ice cream until it is firm, about 3 hours. 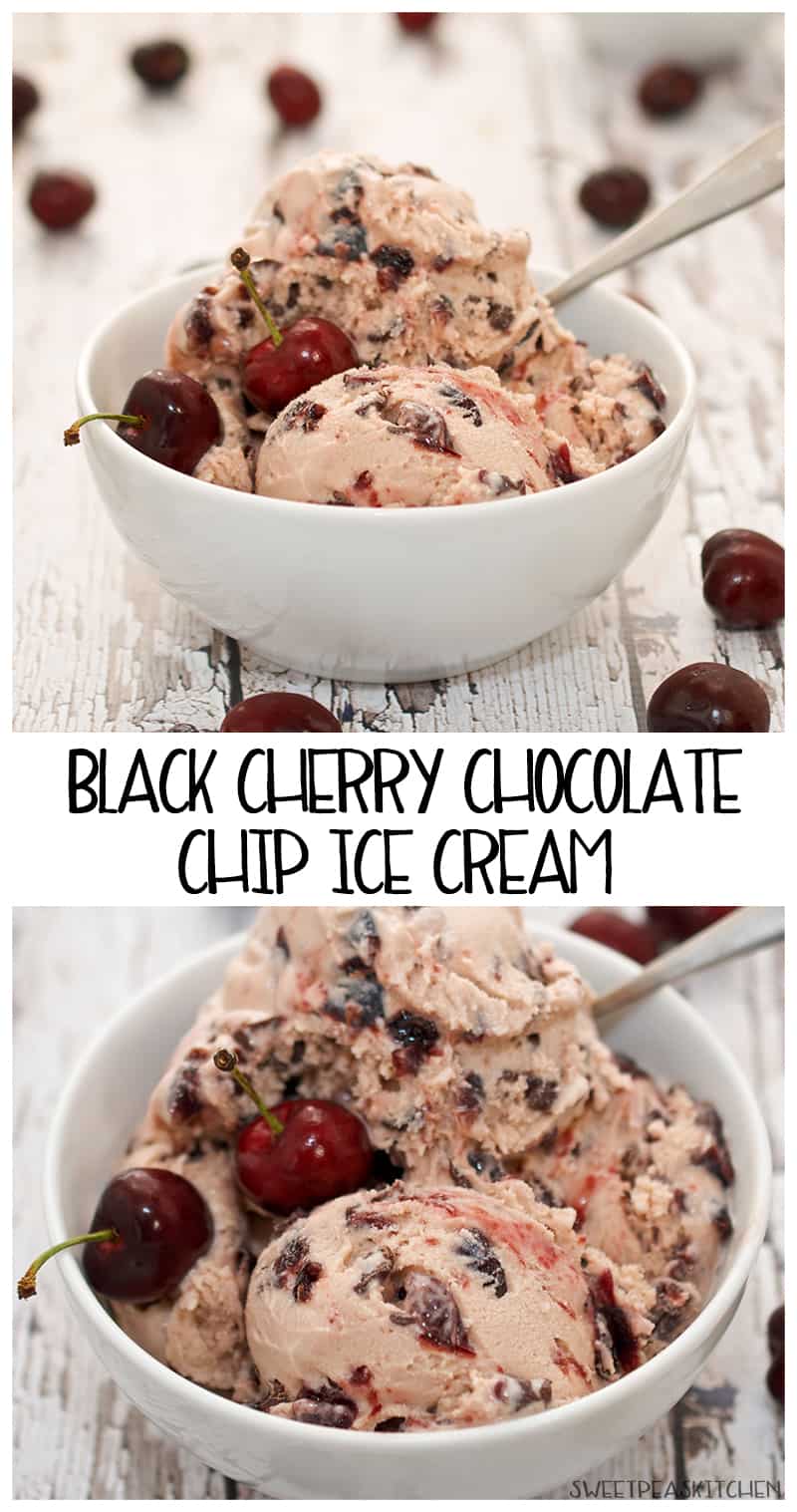 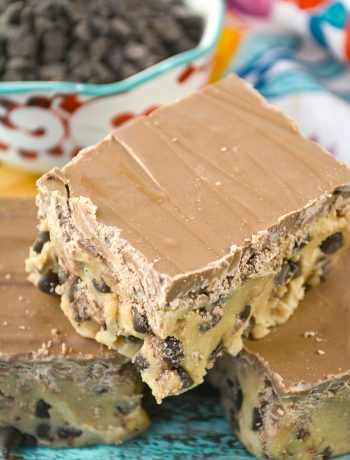 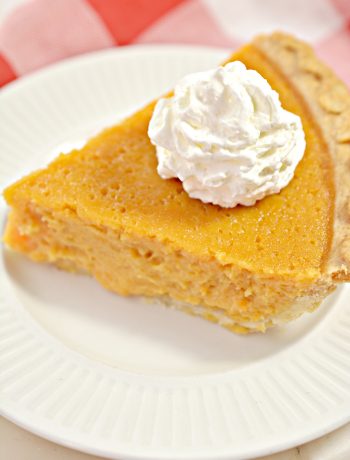 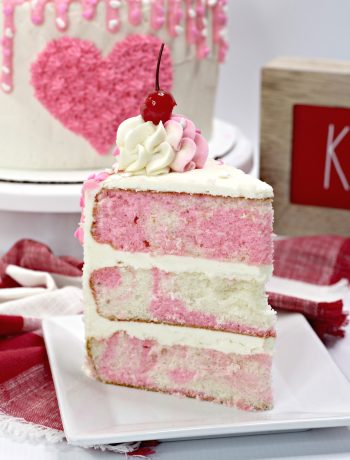