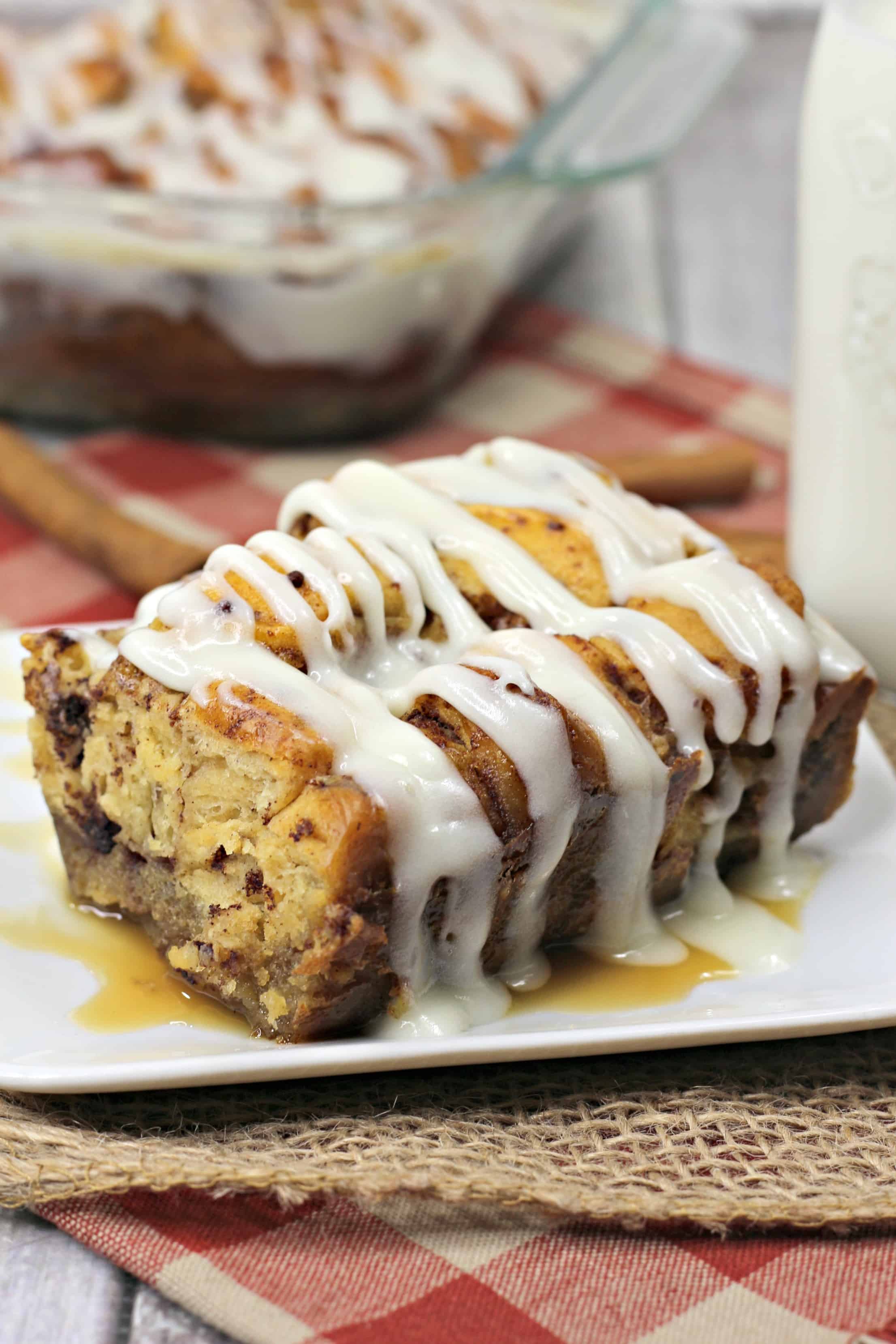 Love french toast but don’t have time to stand over the stove to make it? Wait until you try Cinnamon Roll Oven French Toast Casserole. Made with cinnamon rolls, this is the best baked french toast ever. 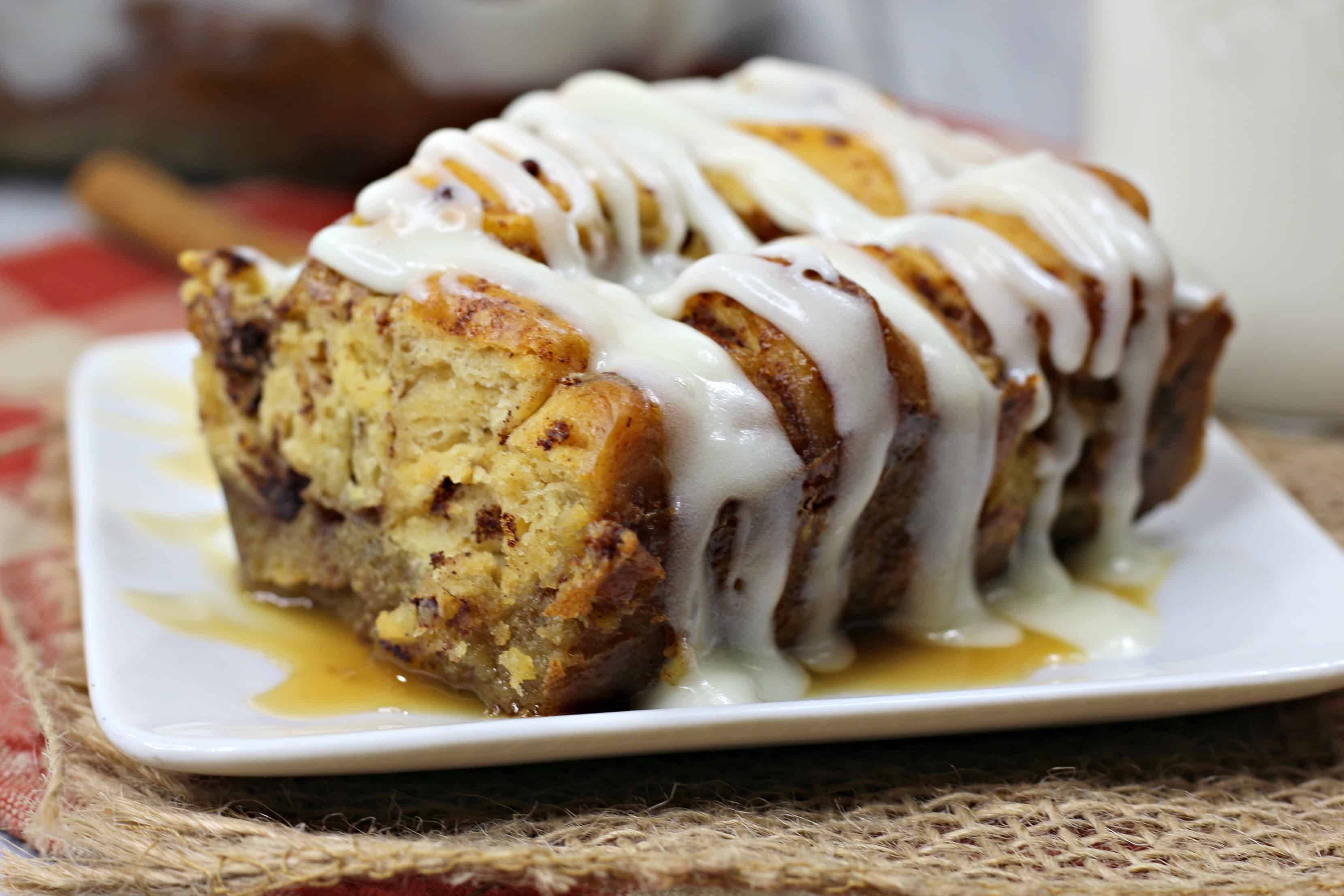 Why You Need This Cinnamon Roll Casserole Recipe

This is one of the most asked recipes. I am not surprised. One bite and it becomes a favorite breakfast treat. What makes this oven french toast so amazing? It is the cinnamon rolls. The premade cinnamon roll dough is used instead of the bread with this recipe. It takes the delicious flavors of the cinnamon rolls and turned it into french toast. It is too good not to love.

The icing that comes with the cinnamon rolls is used as a glaze over the top to take an already tasty amazing dish and takes it one step further. The result is the best french toast casserole anywhere, anytime. 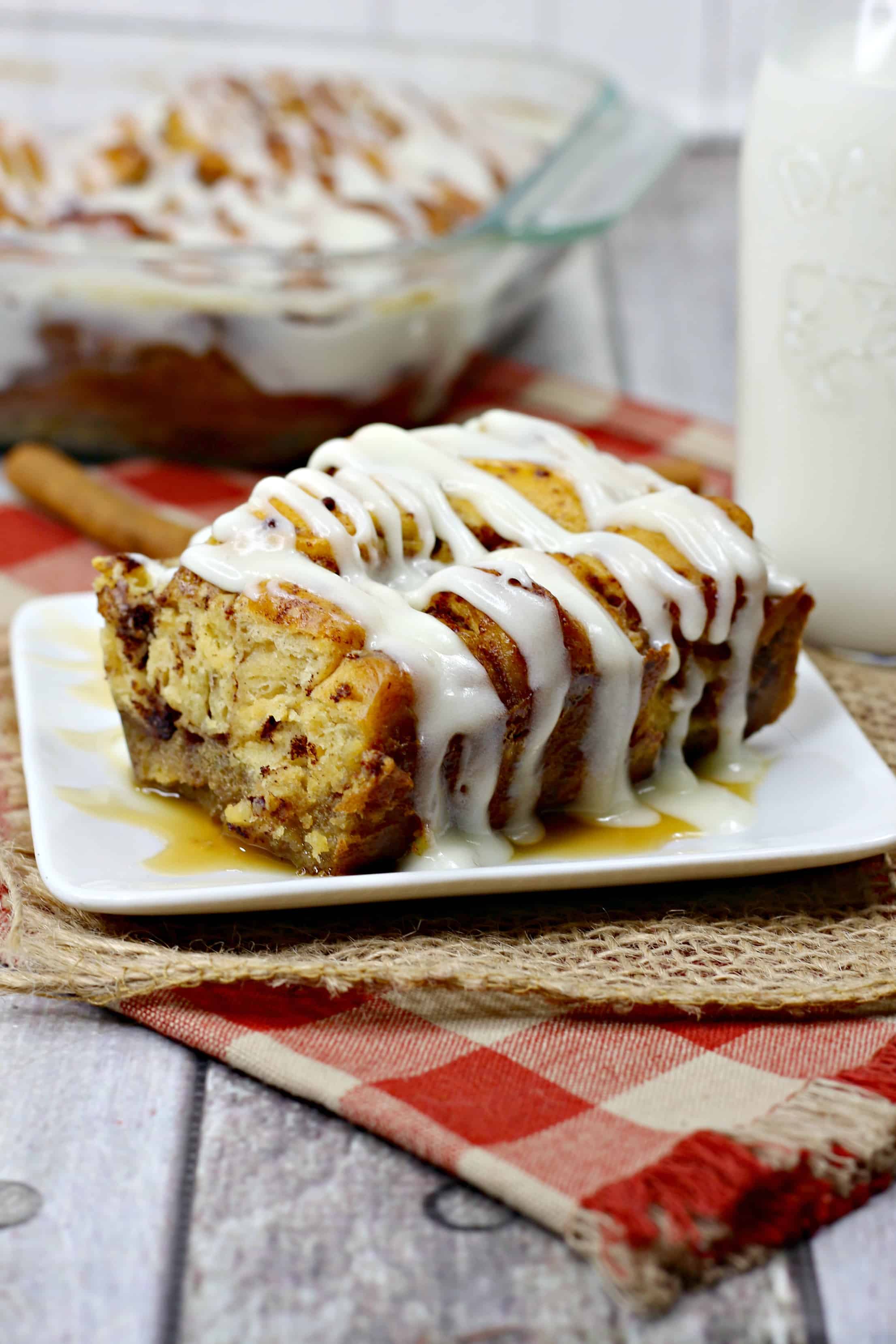 What to Serve with this Best French Toast Casserole

Whenever I make this french toast casserole it reminds me of something that I would get when we go out to eat for brunch. Sometimes for special occasions like Mother’s Day, birthdays or holidays, I like to create a bunch at home. In addition to the best french toast casserole, I also like to make:

This recipe is absolutely perfect. I love the sweetness and the crisp of the edges. But if you are looking for ways to switch it up, consider:

If you make this Baked French Toast Casserole and find that you have leftovers, you can store the leftovers for another day. Store the baked french toast casserole in an airtight container or wrap the baking dish tightly with plastic wrap in the refrigerator. Keeping the air away from the casserole ensures that it stays fresh longer. With a sweet cinnamon roll baked french toast casserole like this one, you want to eat every single piece.

How to Reheat Oven French Toast

If you stored the leftover of the casserole in the same dish it was baked in, you can slide the entire dish back into the oven to reheat. Be careful when reheating the french toast in the oven. You want to make sure to only heat it through. If you overheat it, it will become too dry. Another way to reheat it is in the microwave. This is good for reheating single servings.

How Long Does Cinnamon Roll Casserole

When you store the cinnamon roll casserole in the refrigerator it will stay fresh for up to 4 days. If the casserole is not covered well, it will dry out sooner and will not taste as good.

Can Oven French Toast Casserole be made in a Slow Cooker

You can easily turn this recipe into a slow cooker recipe. Combine all of the ingredients together in the same way you do for the oven casserole. Instead of baking the casserole in the oven, you will add it to the slow cooker. The cooking time in a slow cooker is 2 hours on high or 4-6 hours on low. This is a great idea if you want to wake up to this breakfast. Believe me, your house will smell amazing.

Pre heat oven to 375 degrees.
Melt butter in a microwave and spread in a 9 x 13 baking dish. 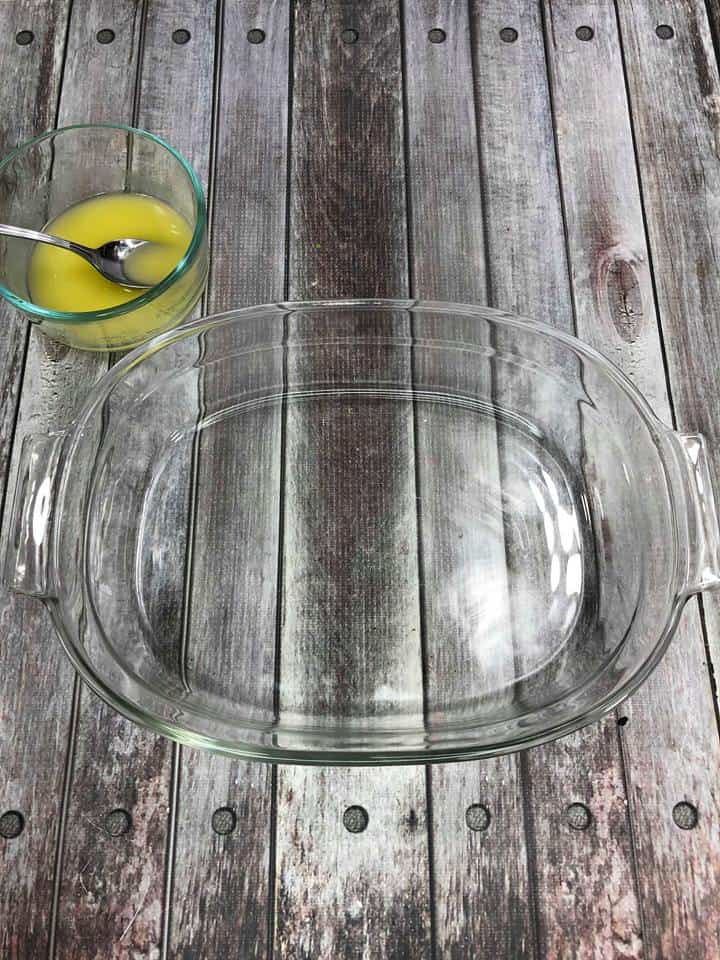 Separate the cinnamon rolls and cut each roll into 4 pieces. Spread in a baking dish
Save the icing to use later. 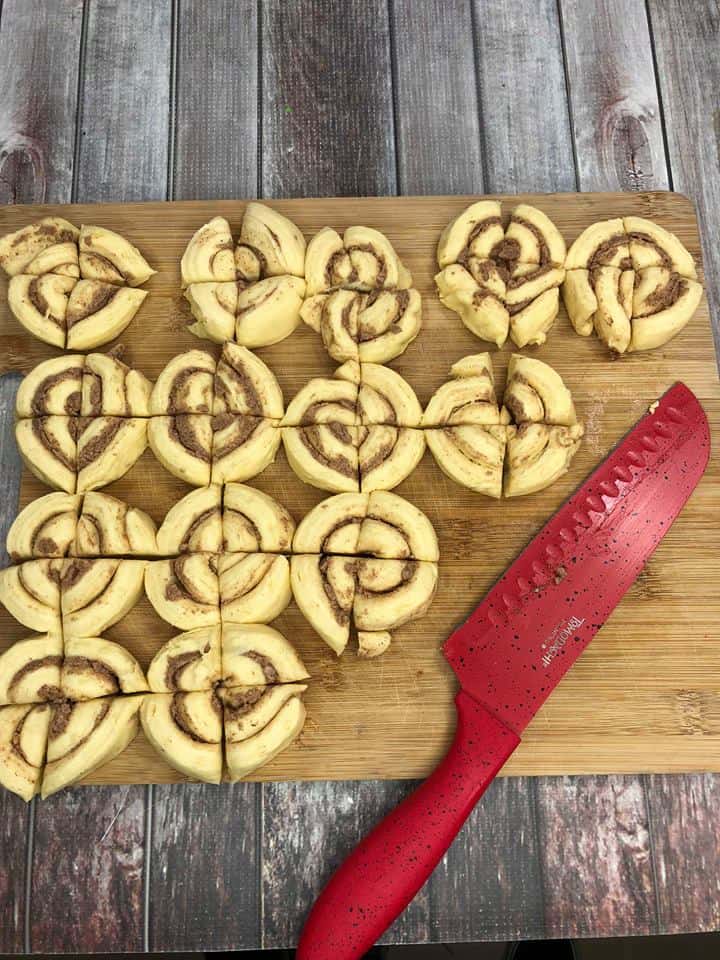 Beat eggs together completely in bowl.
Then add the cream, vanilla, and cinnamon to the eggs and mix thoroughly.

Pour the egg mixture over the cinnamon roll pieces. 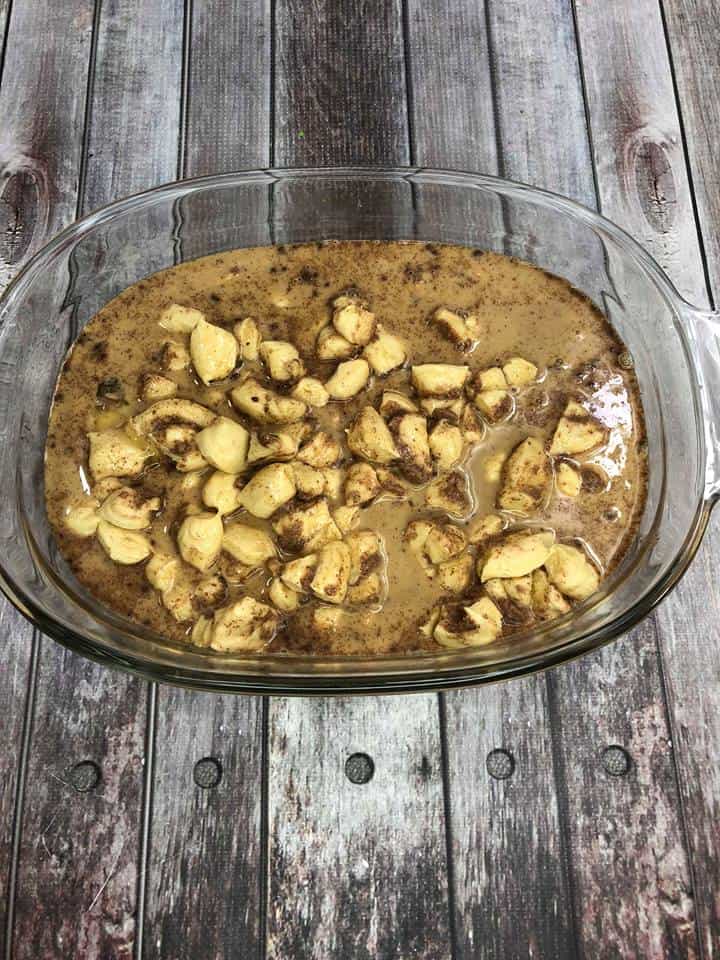 Bake at 375 degrees for about 22-28 minutes or until golden brown.
Let cool for about 15 minutes.
Take the metal cover off the icing and stick it in the microwave for about 15 seconds.
Drizzle icing all over the top of the baked cinnamon rolls.
Serve with syrup if desired. 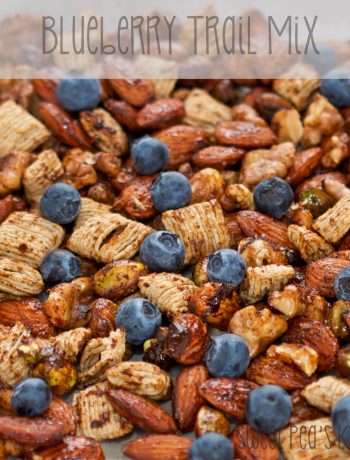 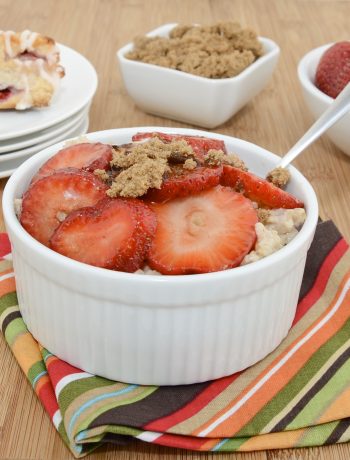 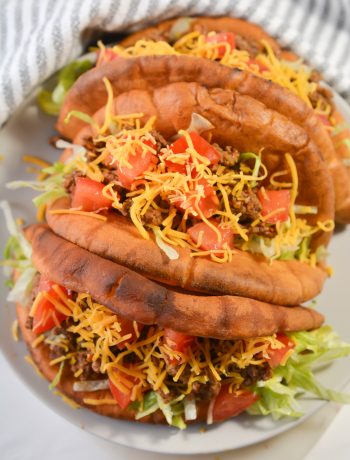