When I was in college, one of my favorite party games was playing bartender. I loved making drinks for my friends and watching them get drunk and silly. One night, we got a wild idea to make Baileys pudding shots. We all gathered around the kitchen island and got to work.

It was so much fun mixing up the creamy pudding mixture and pouring it into shot glasses. We added just a touch of Bailey’s to give it that delicious Irish flavor. And then came the best part: topping each shot with whipped cream and chocolate shavings.

We laughed and joked as we put the finishing touches on our shots. Then, we all took a sip…and let out a collective moan. These shots were insanely delicious! We quickly downed them all and called for more.

If you’re looking for an easy but impressive party treat, give these Baileys pudding shots a try. Your guests will love them!

Making Bailey’s pudding shots is a tradition in my family. Every year, we get together to make them and enjoy them during the holiday season. This year, things are a little different. My grandma is no longer with us, and my mom is moving across the country. But even though things are changing, the tradition of making Bailey’s pudding shots will live on. We’ll all be together in spirit as we make these delicious shots and celebrate our loved ones.

Pudding shots are the perfect party drink. They’re easy to make, and everyone loves them. This baileys pudding shots recipe is our favorite. It’s delicious and festive, and it will definitely get you in the holiday spirit. Enjoy!

What Are Pudding Shots?

Pudding shots are a festive and fun way to celebrate the holidays! They are made by mixing baileys Irish cream with pudding mix, and then freezing them in shot glasses. This easy and no-bake recipe is perfect for parties, and everyone will love these tasty treats.

Why You’ll Love This Recipe

The holiday season is a time for friends, family, and of course, lots of delicious food. If you’re looking for a fun and festive drink to add to your party menu, why not try baileys pudding shots? These shots are made with baileys Irish cream, christmas pudding, and vodka. They’re easy to make and sure to be a hit with your guests.

Why will you love this recipe? First of all, baileys and christmas pudding are the perfect combination of flavors. The baileys gives the shots a creamy and smooth taste, while the christmas pudding adds a touch of sweetness and spice. And who can resist a shot that’s topped with whipped cream and a sprinkle of cinnamon?

Another reason to love this recipe is that it’s so easy to make. Just mix together baileys, christmas pudding, and vodka in a pitcher or bowl, then pour into shot glasses. You can even make them ahead of time so you don’t have to worry about last-minute preparations.

So if you’re looking for something fun and festive to drink at your next holiday party, give baileys pudding shots a try. You’ll love their delicious flavor and easy preparation.

How Long Do Pudding Shots Last?

Well, that depends on what type of pudding shot you make. If you’re using store-bought pudding, then the answer is pretty short – about 2 hours. However, if you’re making your own pudding from scratch, then it can last up to 3 days in the fridge. Just make sure to store them in an airtight container!

Now that you know how long they’ll last, what’s the best way to serve pudding shots? Well, that depends on the occasion. For a fun party treat, put them in shot glasses and let your guests help themselves. Or, if you’re looking for something a little more special, try serving them as part of a dessert buffet. No matter how you serve them, everyone is sure to love these delicious and festive shots!

Can They Be Made Sugar-Free?

Baileys pudding shots are a delicious and festive drink to enjoy during the holiday season. However, if you are looking for a sugar-free version of this drink, you can make them without the added sugar.

Pudding shots are a popular party drink, and for good reason – they’re delicious! But will they make you drunk? Let’s take a closer look.

Most pudding shots recipes call for baileys, so we’ll use that as our example. baileys has an alcohol content of 17% by volume. If you divide that by 3 (the number of tablespoons in a shot), you get 5.666, which is pretty close to 6%. So, if you drink 3 pudding shots made with baileys, you’ll have consumed about the same amount of alcohol as if you had a regular beer.

But it’s important to remember that everyone’s tolerance is different. So if you’re not used to drinking, or if you’re drinking on an empty stomach, you may feel the effects of the alcohol sooner than someone who is used to drinking. And keep in mind that baileys isn’t the only type of pudding shot – there are all sorts of variations, with different types of alcohol and different levels of sweetness. So always be careful when drinking any type of pudding shot, and know your limits!

Where can I find pudding shot cups?

If you’re looking for a way to take your pudding shots to the next level, you’ll need some special cups. While you could just use shot glasses, cups made specifically for pudding shots will make the process a lot easier. You can find these cups online or in specialty stores.

Step 5. Whisk until smooth and let sit for 10 minutes.

Step 6. Fold in a tub of cool whip topping that has been thawed until it is well combined.

Step 1. In a bowl, add ⅔ cup of Baileys liquor.

Step 3. Then, add a box of vanilla instant pudding mix.

Step 5. Fold in a tub of cool whip topping that has been thawed until completely combined.

Step 7. Serve immediately or chill before serving if desired.

How To Store Pudding Shots?

How to store pudding shots is an important question, especially around the holidays. When you make these delicious shots, you want them to last as long as possible. Here are a few tips for storing pudding shots:

What To Serve With Pudding Shots

Can I make pudding shots ahead of time?

Yes, you can make pudding shots ahead of time. Just follow these simple steps:

Can I freeze pudding shots?

Yes, pudding shots can be frozen. Simply place them in a single layer on a baking sheet and freeze for 2-3 hours. Once frozen, transfer the pudding shots to a freezer-safe bag or container and keep in the freezer for up to 2 months. When ready to serve, let the pudding shots thaw at room temperature for 10-15 minutes before enjoying.

For baileys pudding shots, you could try adding different flavors like peppermint or chocolate. You could also top them with whipped cream, chocolate shavings, or a drizzle of baileys. No matter what variation you choose, these shots are sure to be a hit at your next party!

You can add any number of garnishes to your baileys pudding shots to give them a bit of extra flavor and flair. Some favorites include whipped cream, chocolate shavings, or crushed candy canes. You could also try serving them with a drizzle of caramel or chocolate sauce. Be creative and have fun with it! 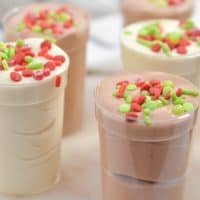 White Sangria – Shake up your summer nights with this fresh and fruity White Sangria made with white wine, triple sec, oranges, and lemons.

Blackberry Bramble – It’s simple to make and just as easy to drink!