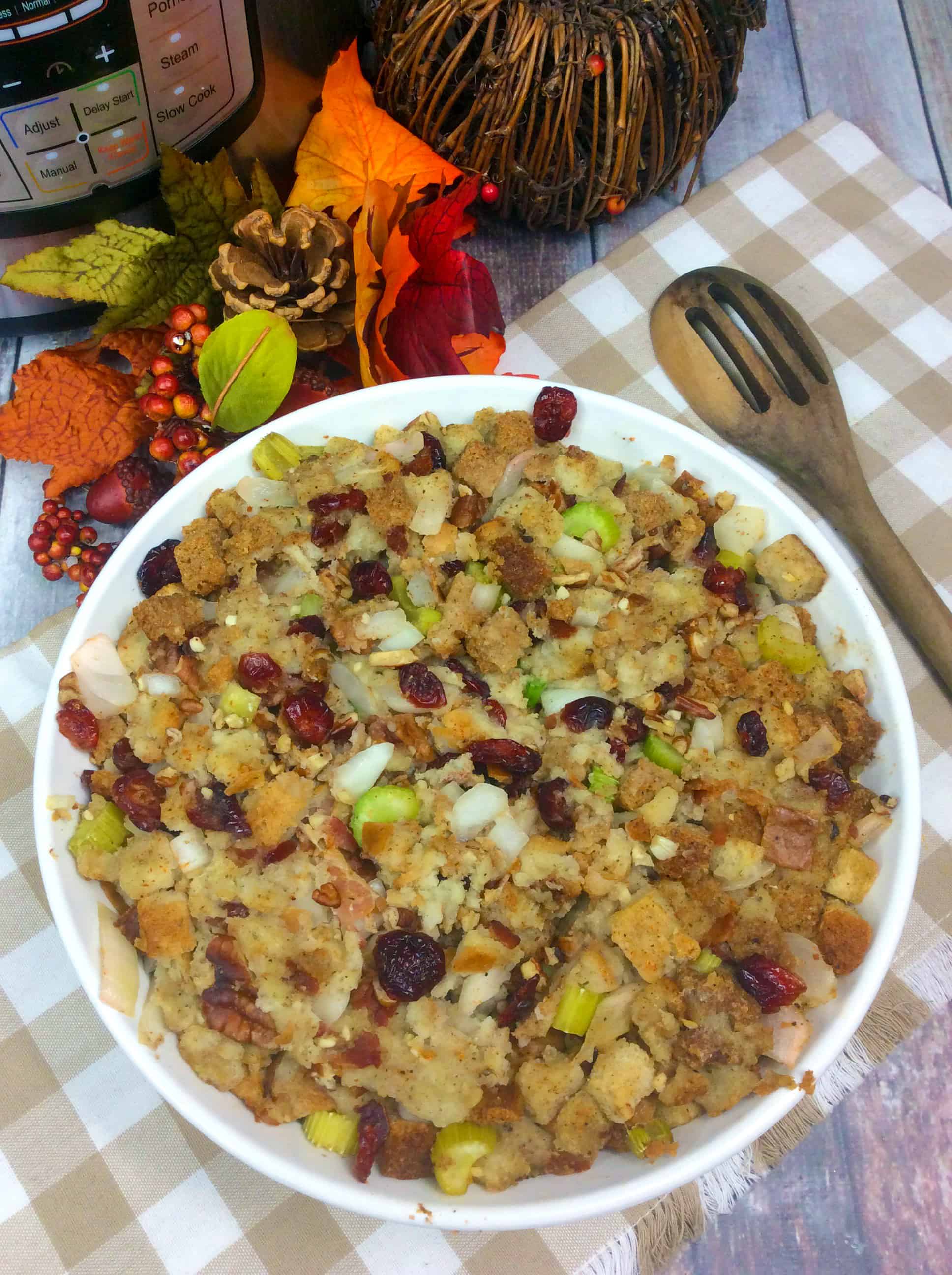 This Instant Pot Southern Stuffing is the best homemade stuffing recipe you’ll ever make! Made with plenty of veggies, it’s one of my go-to healthy pressure cooker recipes for a side dish. You’ll definitely want to save this one for Thanksgiving or any other chicken or turkey dinner!

How is it possible that we’re less than a month from Thanksgiving? With Christmas and the new year looming just another month in the future. It seems like the year just started! And here in California, we’re not experiencing the fall weather most other places are, so sometimes I can forget just how close to the holidays we are.

Once I realized how close Thanksgiving was, I decided it was time to start prepping by testing out some new Thanksgiving recipes. Most Thanksgiving dinners consist of the same few dishes – mashed potatoes, turkey, stuffing, gravy, cranberry sauce and maybe a few casseroles, so I’m trying to make some of the traditional recipes made simpler and quicker, which is leading to a lot of utilization of my trusted Instant Pot. 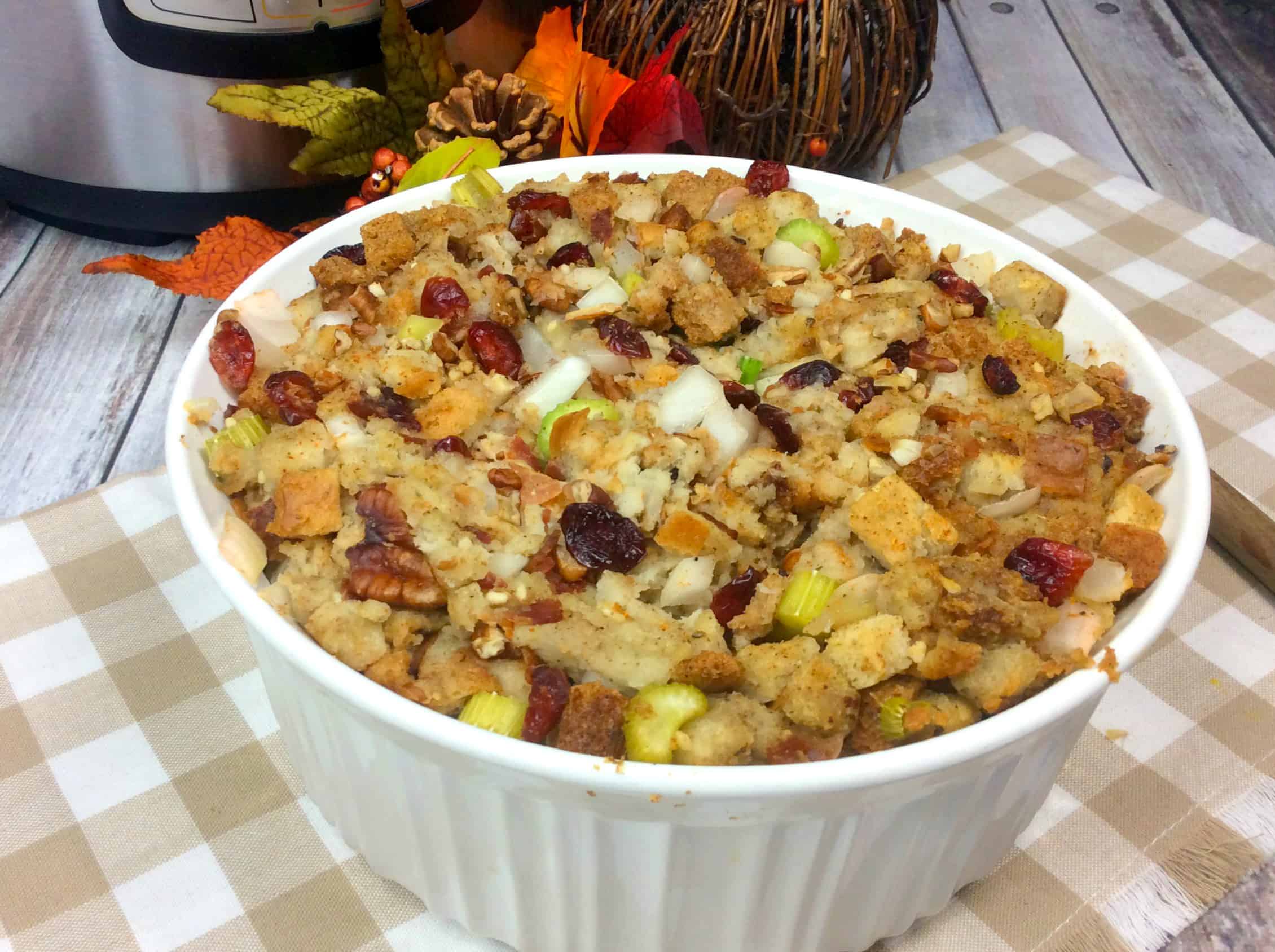 I’ve tried out lots of pressure cooker recipes since buying my Instant Pot, but this homemade stuffing recipe may be my favorite recipe to date, also with this Instant Pot Mississippi Ranch Chicken recipe.

While I had Thanksgiving in my mind while making this Instant Pot Southern Stuffing, it’s also perfect to go with some Instant Pot chicken and stuffing. Homemade stuffing is something I always make near the holidays, but it’s also a great side dish for a chicken or turkey dinner any time of the year. Actually, turkey and gravy with stuffing are one of my favorite comfort food dinners!

Homemade dressing or stuffing, however, you call it this recipe is dynamite. This Instant Pot Southern Stuffing uses all of the traditional homemade stuffing recipe ingredients with a few extra treats, like crispy bacon, cranberries, and pecans. The added ingredients add some texture and flavor. I mean, who doesn’t love a little bacon on their plate? My mouth is watering just thinking about how good this stuffing is!

I like my homemade stuffing to be soft but if you’d like a little extra crunch to yours, just spread the dressing on a pan and bake it for a few moments after cooking it in the Instant Pot. Sometimes I’ll heat leftover stuffing up in the oven to give it a little texture the second time around, but it’s really all up to personal preference. The flavor is the same either way, and that’s the important part!

If you’re considering some pressure cooker recipes to make your holidays more manageable, I definitely recommend trying out this Instant Pot Southern Stuffing. And no, you don’t have to be from the south to make it!

How To Make Stuffing

My mouth is watering as I think about eating this deliciously easy dressing recipe! Not only is it great for the holidays, but it’s also perfect for enjoying on those days when you don’t feel good. You are going to be impressed with how quickly it comes together too! Take a look at these simple steps to make this stuffing recipe: 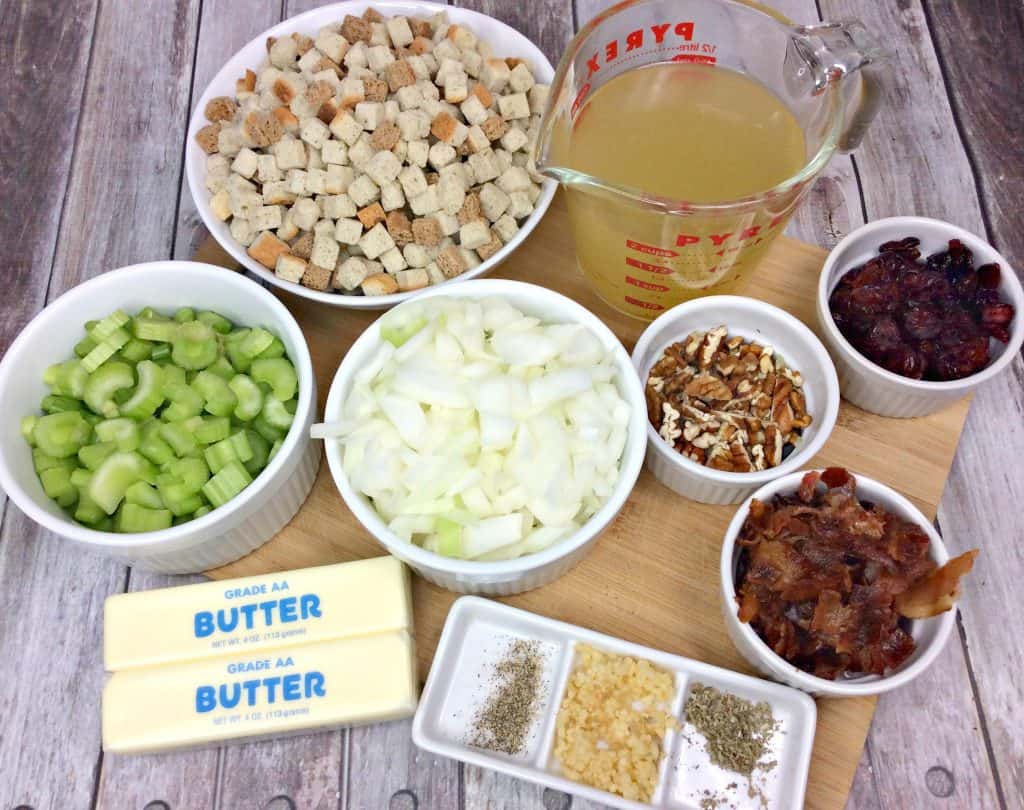 Step 1: Toast bread in the oven for approximately 20 minutes. It should be pretty dry when you take it out of the oven. Then, cut it into cubes. Try to cut the cubes the same size, so it cooks more evenly.

Step 2: While the bread is toasting, you can cook the bacon in a skillet or in the oven too. Once it’s done crumple it into small pieces.

Step 3: Chop up the celery, onion, cranberries, and pecans. 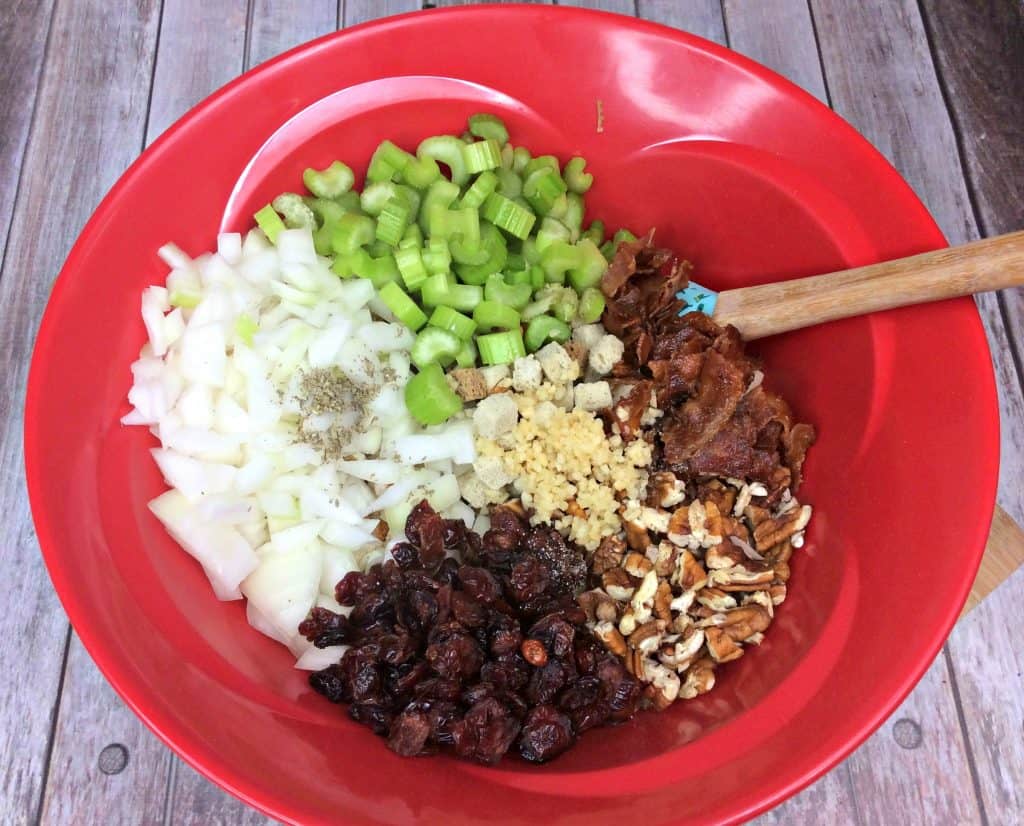 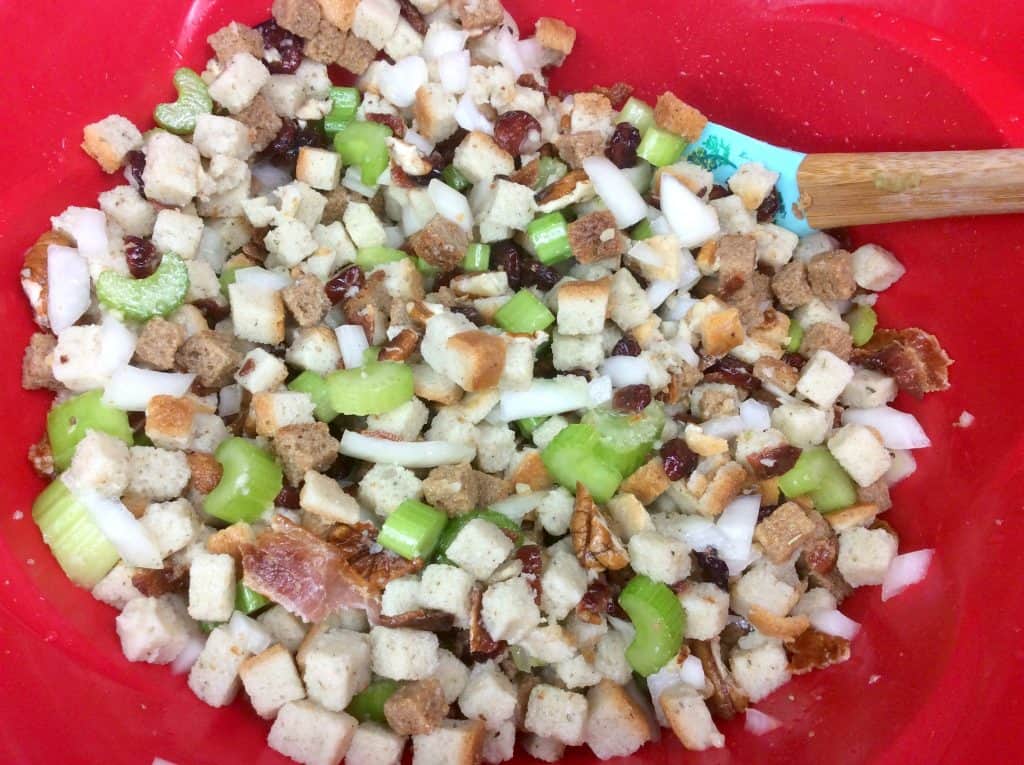 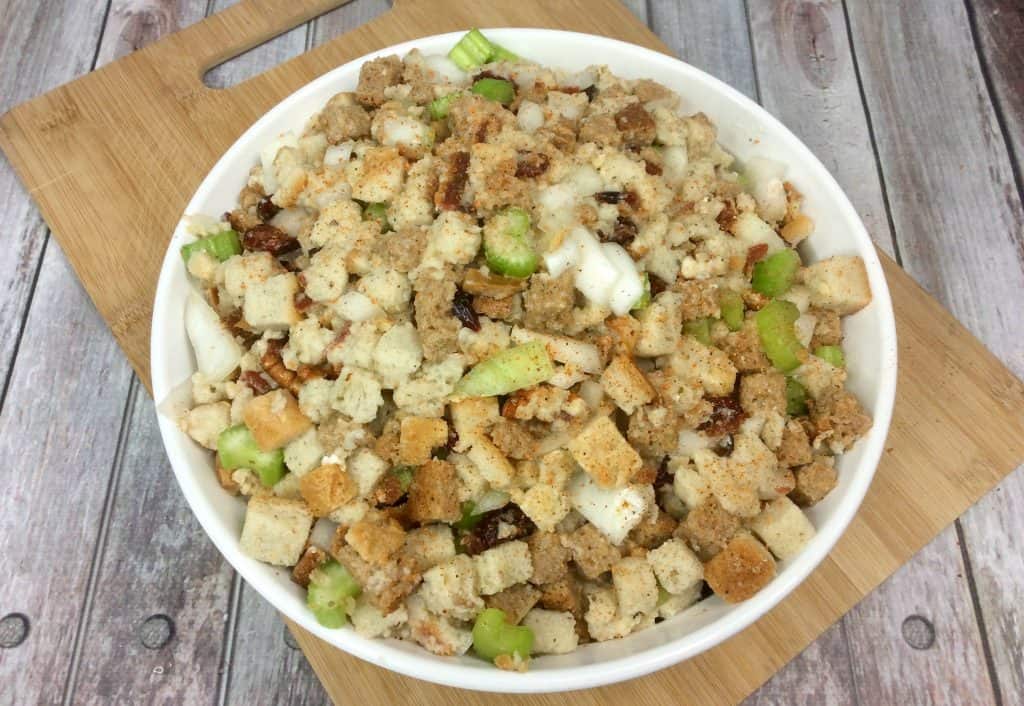 Step 7: Cover the baking dish with foil and cook in Instant Pot for 15 minutes. Once it’s finished, do a quick release, so the stuffing doesn’t get soggy.

Step 8: Get a big helping of this Instant Pot southern stuffing and devour every bite. Yummy! 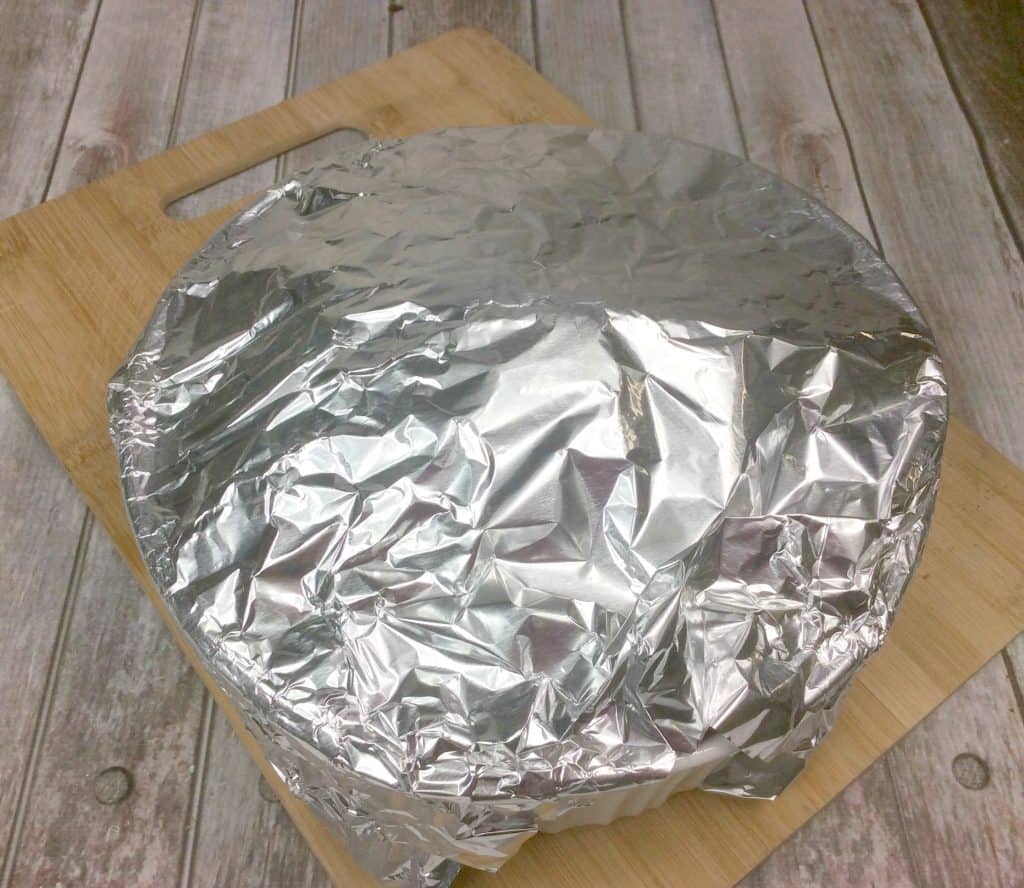 You know how much I like to change things up from time to time. That is what I love about this southern stuffing recipe! You can add or omit ingredients based on what you have on hand and what you think will taste good that day. Here are some ideas to try:

What Kind Of Bread Is Used For Stuffing?

There are so many types of bread to choose from I can understand why it can be confusing. Plus, the bread is the star of the show when it comes to this Instant Pot stuffing recipe. You can use whatever bread you have on hand. Try them all because you will be surprised how much the flavor can change by switching out the type of bread. Here are some ideas to get you started:

Can You Make Stuffing Ahead Of Time Then Refrigerate?

The answer depends on what your intention is. If you want to get all the ingredients together and do the prep work, put it in the fridge and cook later, then the answer is a huge NO! The bread would look its crunchiness, and you would end up with a soggy, gross mess.

You can, however, add the ingredients together and toss all of it in the freezer uncooked. It will last anywhere from 2-4 months. When you are ready to serve, you can thaw for a short amount of time then bake. You don’t want it to thaw overnight in the fridge as you do with most other foods. It will break down the bread and cause it to get wet and mushy. Your best bet is to bake it or tossing it into the Instant Pot shortly after removing it from the freezer.

If you are looking to meal plan, then you can cook this easy dressing recipe ahead then place it in the fridge or freezer. In the refrigerator, this dressing recipe will last up to 4 days or if up to 1 month in the freezer. To reheat Instant Pot stuffing, your best bet is to bake it in the oven for 30-35 minutes at 325 degrees. Check on it and serve when it gets to the desired temperature.

How Do You Fix Soggy Stuffing?

If you end up with soggy Instant Pot southern stuffing for some reason, don’t worry we can fix it! Simply spread the stuffing out on a baking sheet and bake at 350 degrees until it has dried out some. Thankfully, the fix is pretty easy, and you don’t have to waste all that yummy food.

What Goes With Stuffing?

When making this easy dressing recipe, you might be asking yourself what will it go with? The good news is that it will pair well with almost anything! Try it with these ideas:

Now, time to save this recipe on Pinterest for later:

Cook Time: 40 minutes
Total Time: 40 minutes
This Instant Pot Southern Stuffing is the best homemade stuffing recipe you'll ever make! Made with plenty of veggies, it's one of my go-to healthy pressure cooker recipes for a side dish. You'll definitely want to save this one for Thanksgiving or any other chicken or turkey dinner! 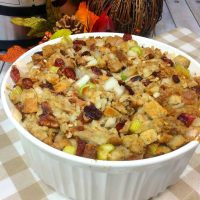 If you prefer the stuffing as is then after removing the baking dish from the instant pot rewrap the foil on top. keeping it on until you are ready to serve it.
If you would prefer to have the stuffing a little crispy.
Simply take the stuffing out of the baking dish and transfer it on to a parchment lined baking tray sprayed with non-stick cooking spray. Put in preheated 350° oven for 5 – 10 minutes to crisp up the stuffing.
Author: Laura

Ham and Asparagus Casserole – Perfect for busy weeknights or even weekend brunch! 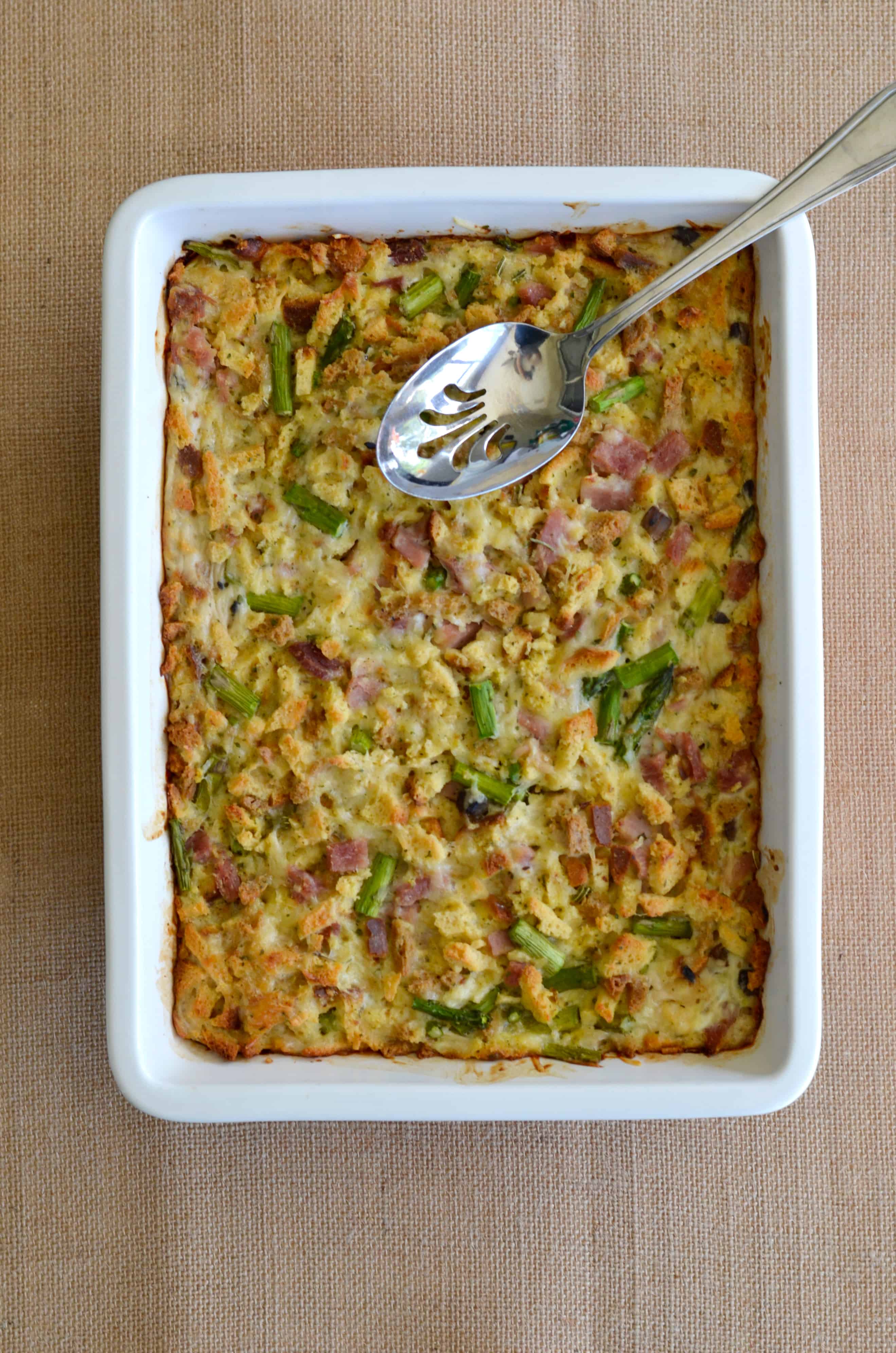 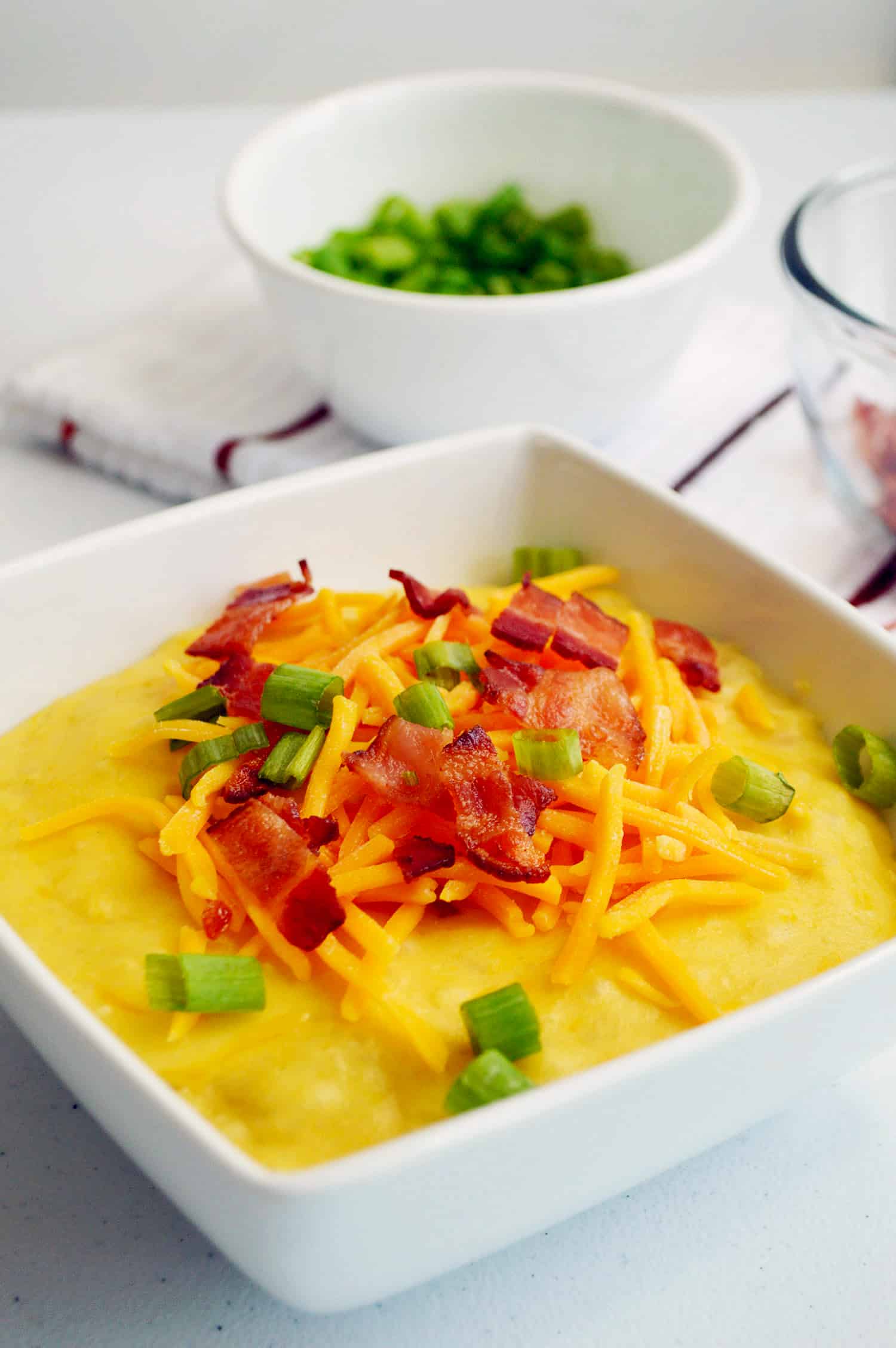 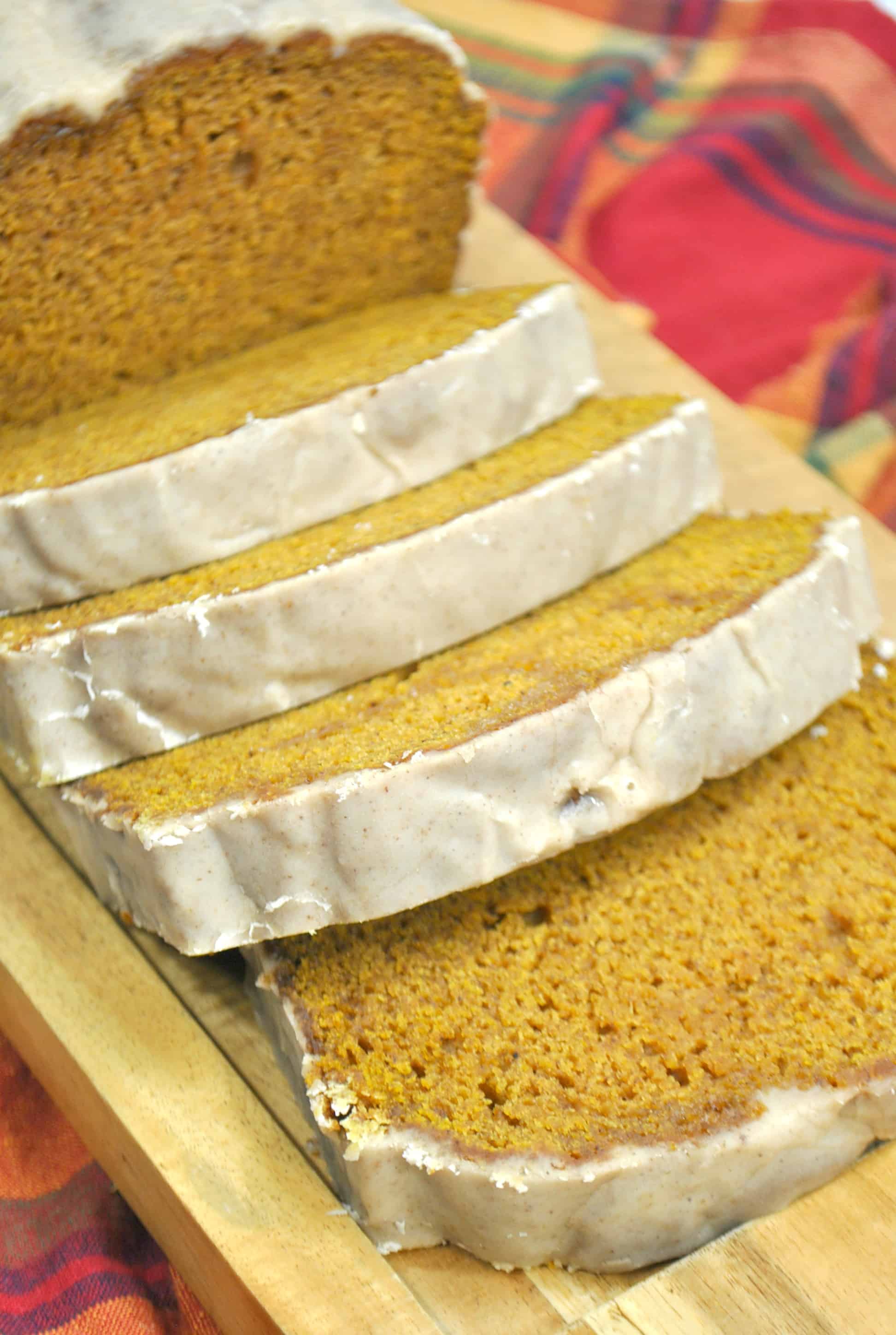