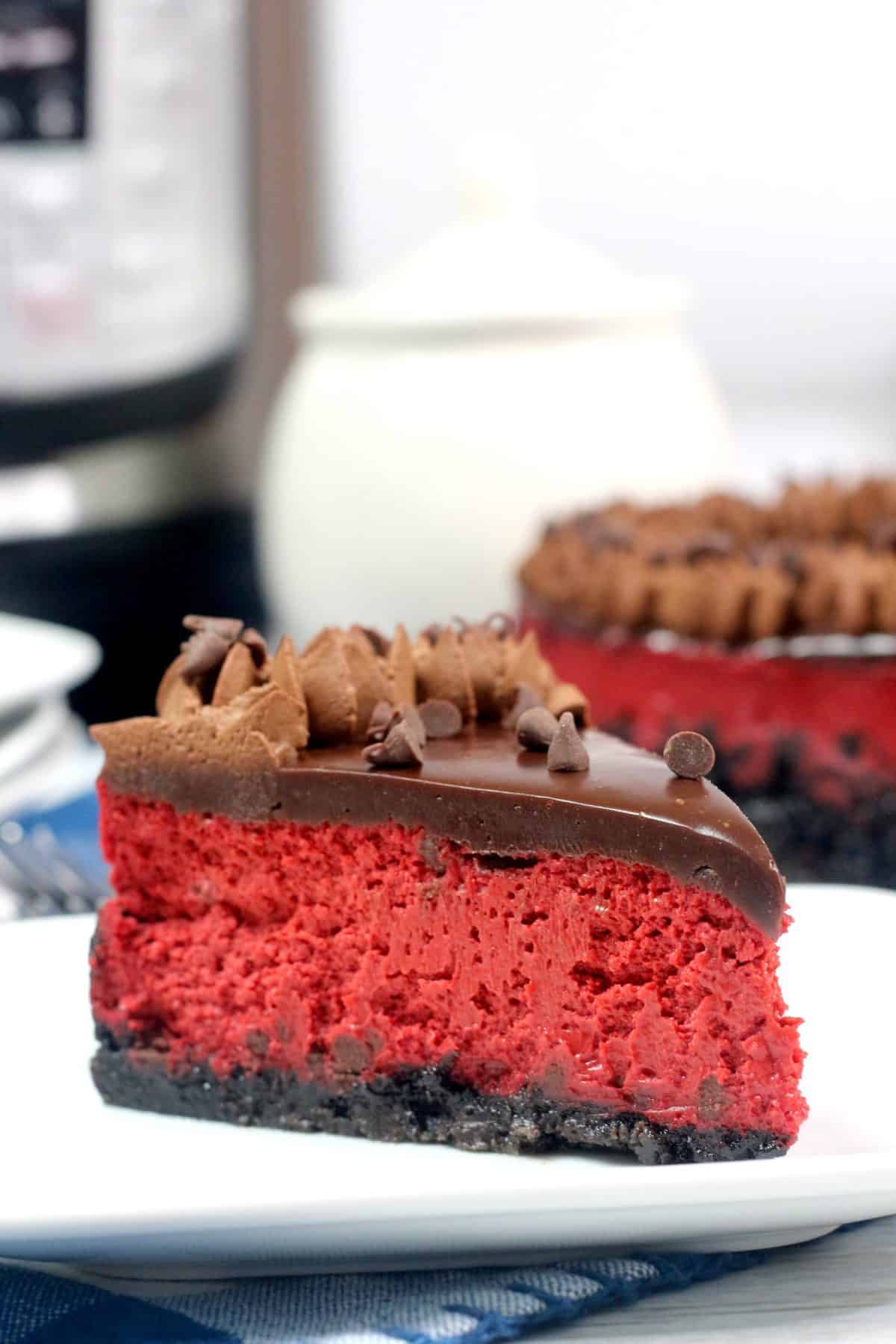 This Instant Pot Red Velvet Cheesecake Recipe is going to knock your socks off! It’s bright red color, with a tasty Oreo crust, is precisely what you need for any holiday. It’s perfect for Valentine’s Day, Christmas dessert, or any other reason you want something that’s rich and decadent.

Every bite of this red velvet Oreo cheesecake is velvety, smooth, and perfectly creamy. The best part is you can make this amazing cheesecake in your pressure cooker.

You guys! You won’t believe how insanely good this pressure cooker red velvet cheesecake truly is until you bite into it. It is such a crowd-pleasing dessert; no one can resist how beautiful it is or the way it tastes. If you followed my blog at all, you already know that I have a massive love for anything that’s red velvet flavored.

Turning a cheesecake recipe into red velvet is like a dream come true for me. It’s the best of both worlds and anything I could ever ask for in a dessert.

It has chocolate from the Oreos, creaminess from the Cheesecake, and it’s red velvet! 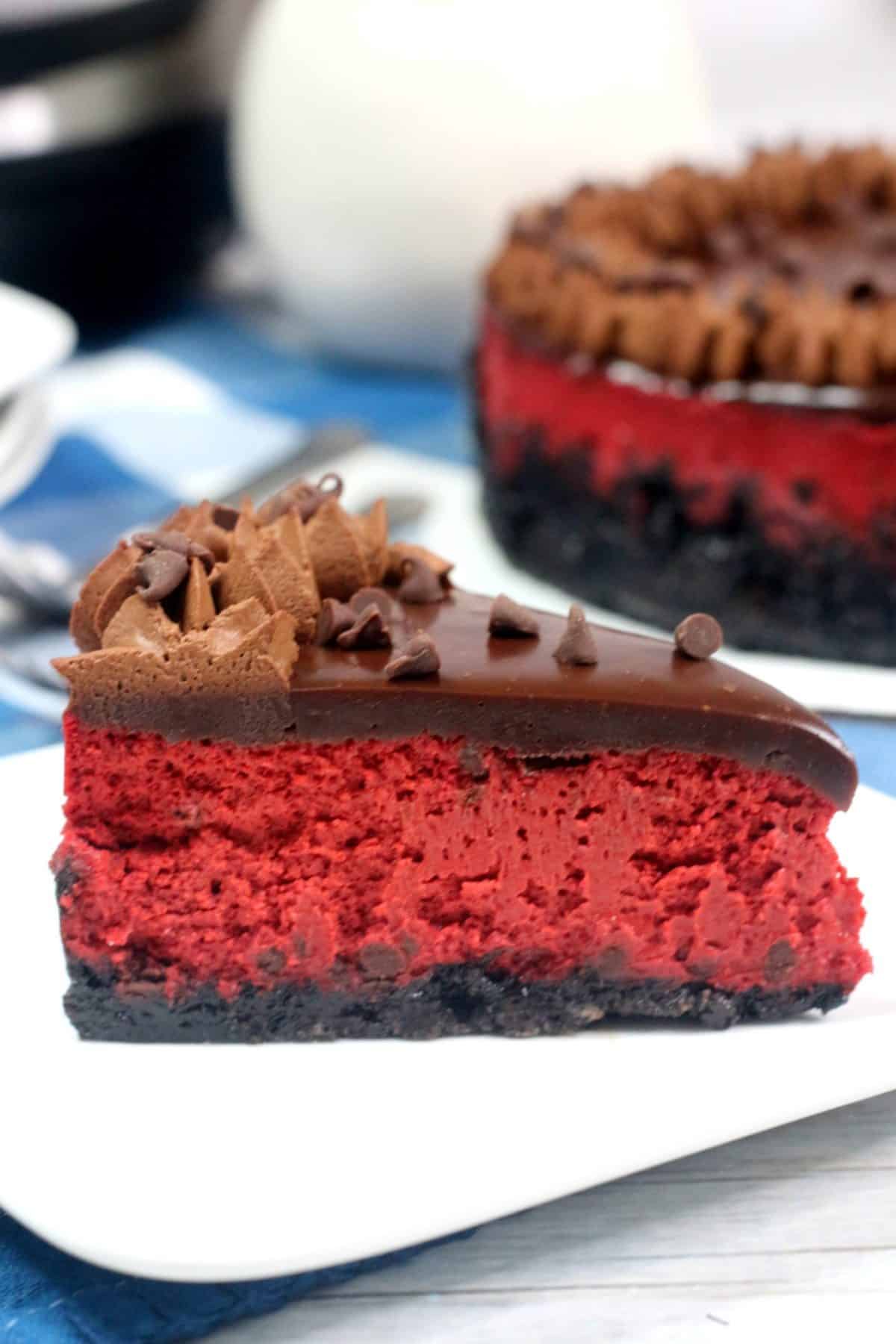 It doesn’t matter if you are looking for something extra special for a bake sale, community event, or you just want to give a thoughtful gift for a new neighbor. Giving the gift of this red velvet cheesecake is going to make someone smile. This heavenly tasting cake is something that you will not forget after you taste it.

Why Make Cheesecake In Instant Pot

I enjoy making cheesecakes in my instant pot because it is a really fast and easy method that I don’t really have to put a lot of work into. Basically, you prepare the cheesecake, cook it in the instant pot, and let it sit up in the fridge overnight. It’s pretty much effortless and saves you a lot of time. Plus, the creaminess that you get from cooking a cheesecake in the instant pot is one of the best things you’ll ever taste. 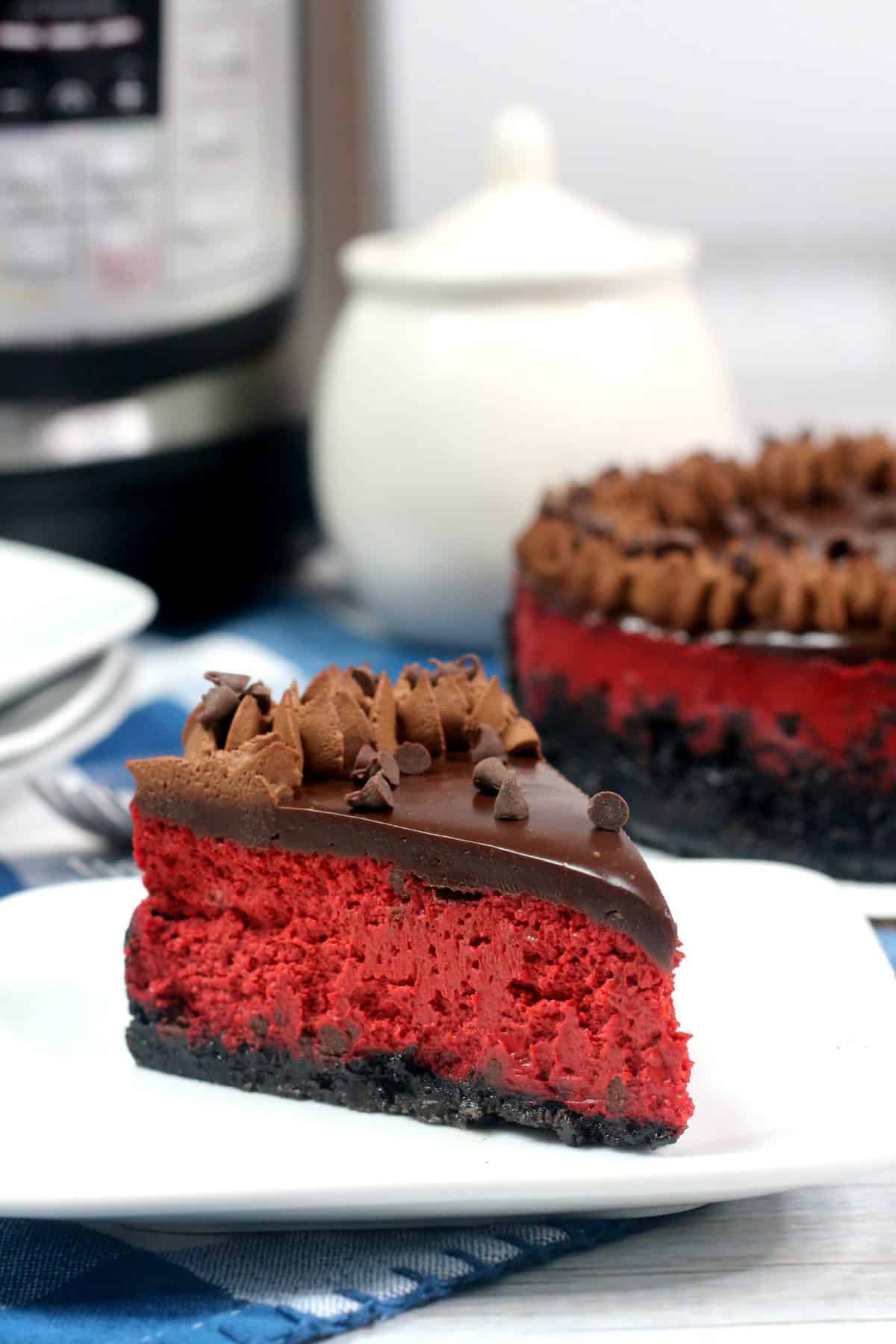 Yes, absolutely, you can freeze this leftover red velvet cheesecake. You can either slice it up individually and store each piece of cake, or you can keep the entire cheesecake. Wrap it up with a piece of plastic wrap then place the cheesecake inside of a freezer container. It will last in the freezer for up to three months.

I like to add a ganache on top of the cheesecake, along with chocolate whipped cream. However, you could also sprinkle the top of the cake with crushed Oreos, mini chocolate chips, or white chocolate chips. All of those ideas would be absolutely delicious and be the perfect way to add some elegance to your red velvet cheesecake.

What Does Natural Release Mean

A natural lease means that you let the pressure in the instant pot release on its own. Sometimes this can take 15 or 20 minutes to complete a natural release. You will know in the natural release is done once you hear your instant pot beep. Then you’ll be able to remove the lid from your instant pot. Alternatively, a quick-release means that you physically remove the pressure from the instant pot by switching the valve to the venting position using a wooden spoon or kitchen towel. 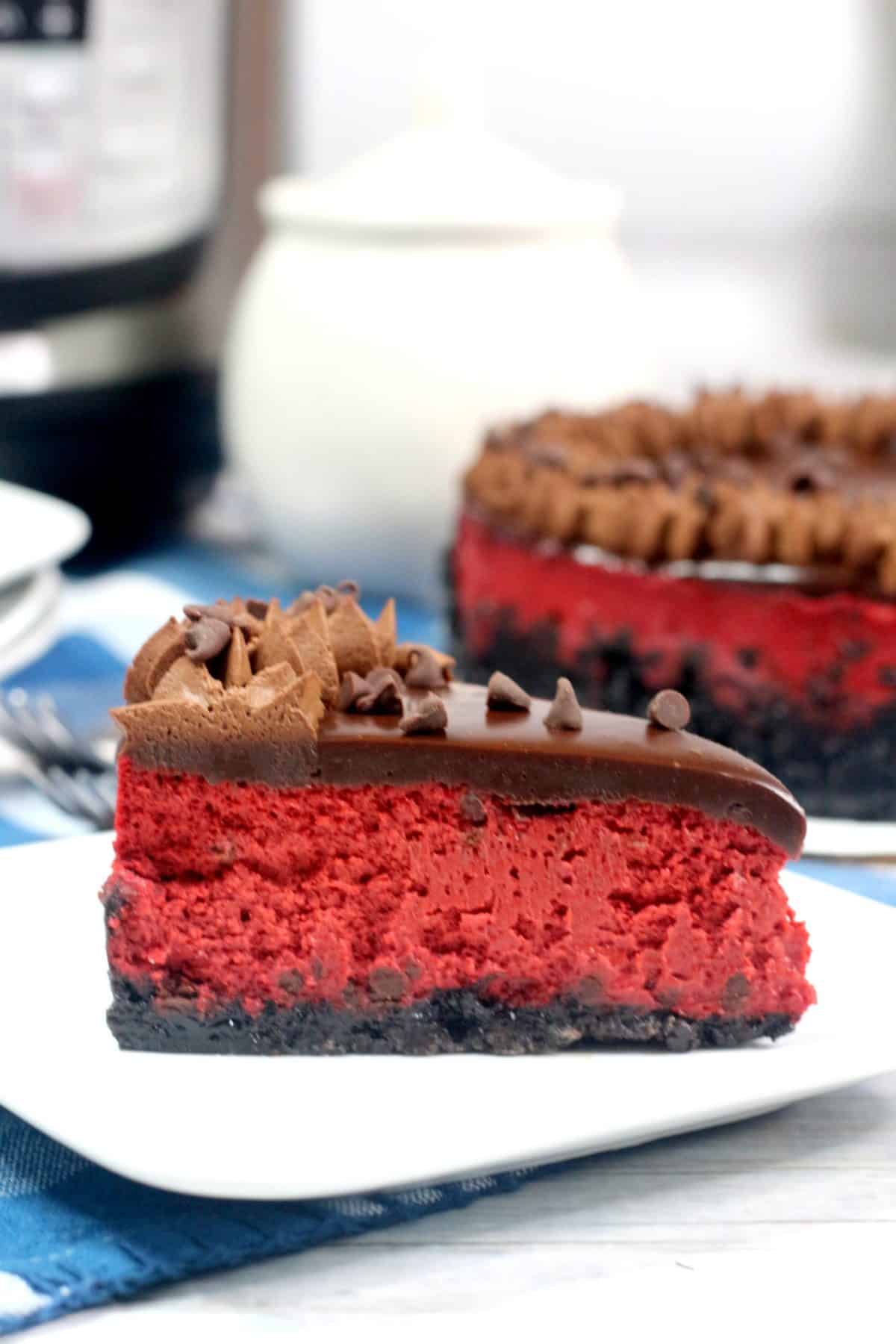 How to Make Red Velvet Cheesecake

1. Begin by preparing a springform pan by spraying it with nonstick spray.

2. Crush the Oreo cookies, so they are a sand-like texture. You can crush the cookies by placing them in a ziplock bag and using a rolling pin to go over the top of them or put them inside of your food processor and pulse.

3. Place the cookies along with the melted butter in a large bowl. Stir the crumb mixture until it is well combined and moist.

4. Press the Oreo crust into the springform pan. You can use your fingers, a cup, or even a measuring cup to push the crust down. Place the crust in the refrigerator for at least 20 minutes.

1. Take a stand mixer or hand mixer and combine the cream cheese until it is light and fluffy. Add and the sugar and continue to blend.

2. Mix and the sour cream, vanilla, cocoa powder, and red food coloring until combined. Add the eggs one at a time until their combined.

3. Take the crust out of the refrigerator and pour the cheesecake filling inside of the springform pan.

4. Place one cup of water inside of your instant pot and add the trivet. Then, cover your cheesecake with a paper towel and aluminum foil. This will prevent water from leaking inside of the cheesecake.

1.Cream in a small pot until it is simmering. Then pour some chocolate chips into a heatproof bowl. Pour the hot, heavy cream over the chocolate chips and allow them to sit for 1 to 2 minutes.

2. Whiskey chocolate chips and heavy cream together until they are smooth and creamy. Pour over the cold cheesecake and smooth it out, so it’s even. Sprinkle with some chocolate chips.

1. Put whipped cream; you will need to combine the heavy cream and cocoa powder together. Mix until stiff peaks develop.

2. Scoop the whipped cream into a Piping Bag and pipe dollops around the edge of the cheesecake. 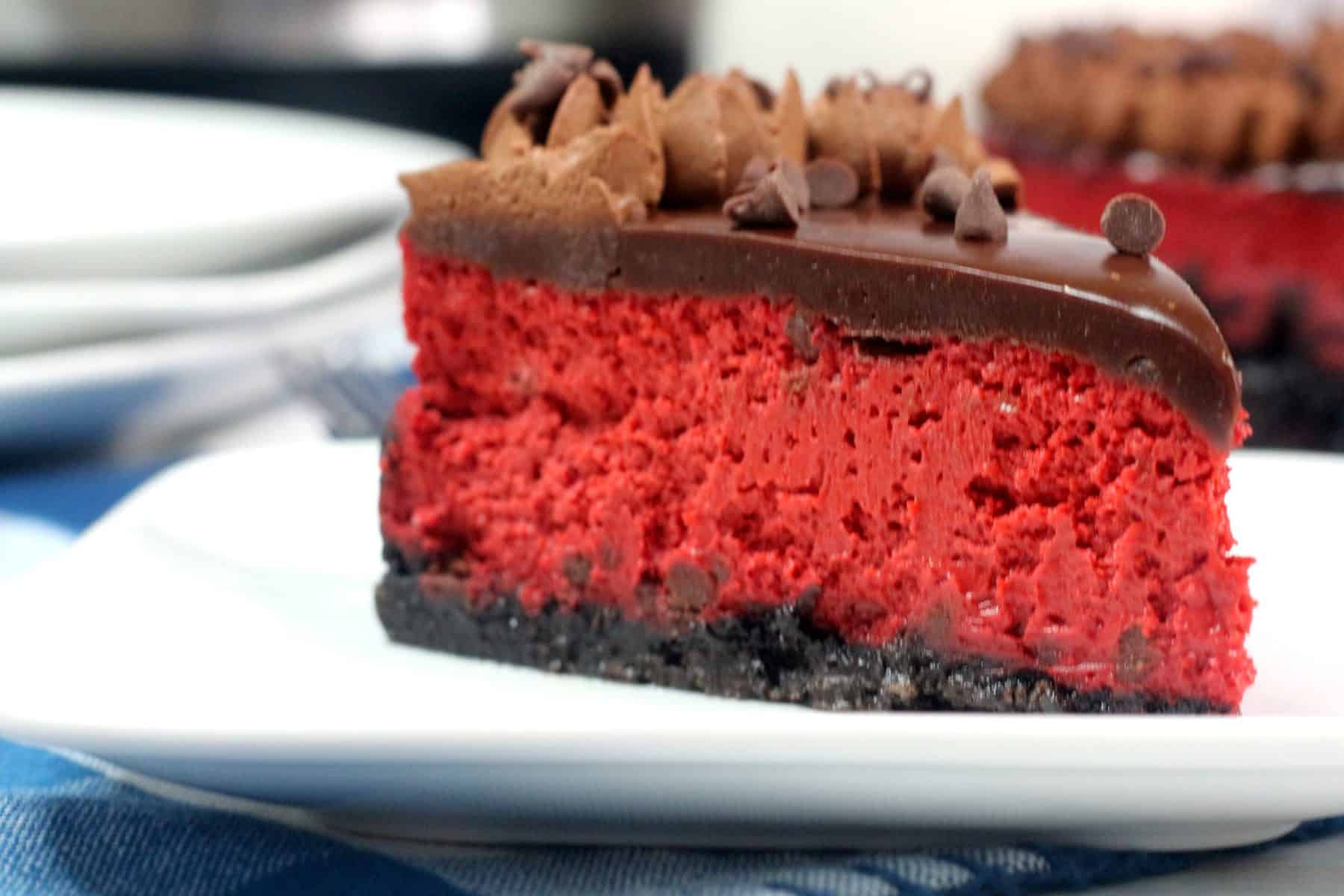 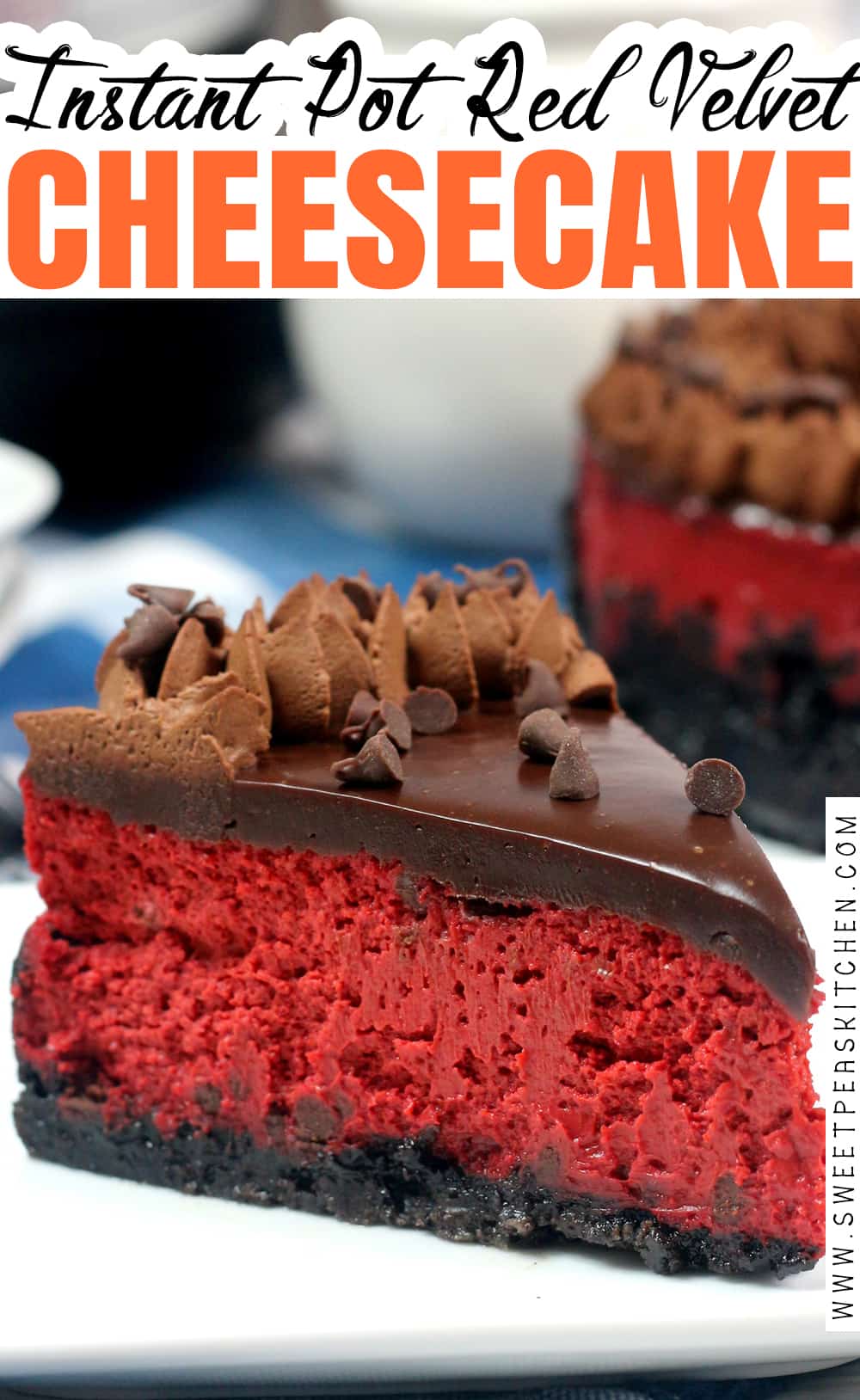 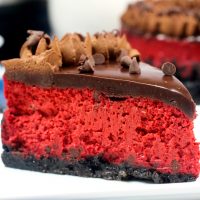 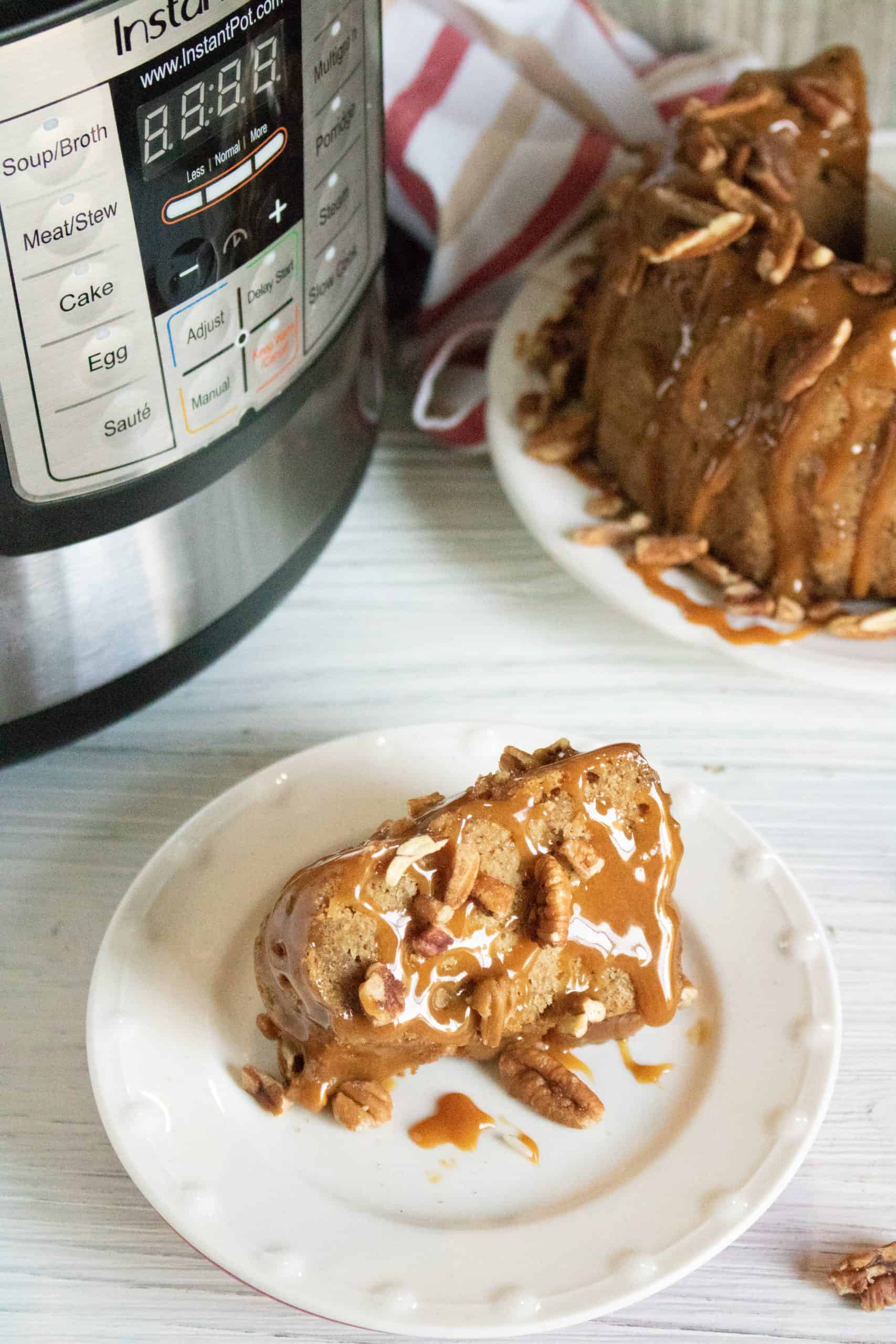 Instant Pot pumpkin cake recipe – when fall is in the air, it makes sense to want to make yummy foods with pumpkin. 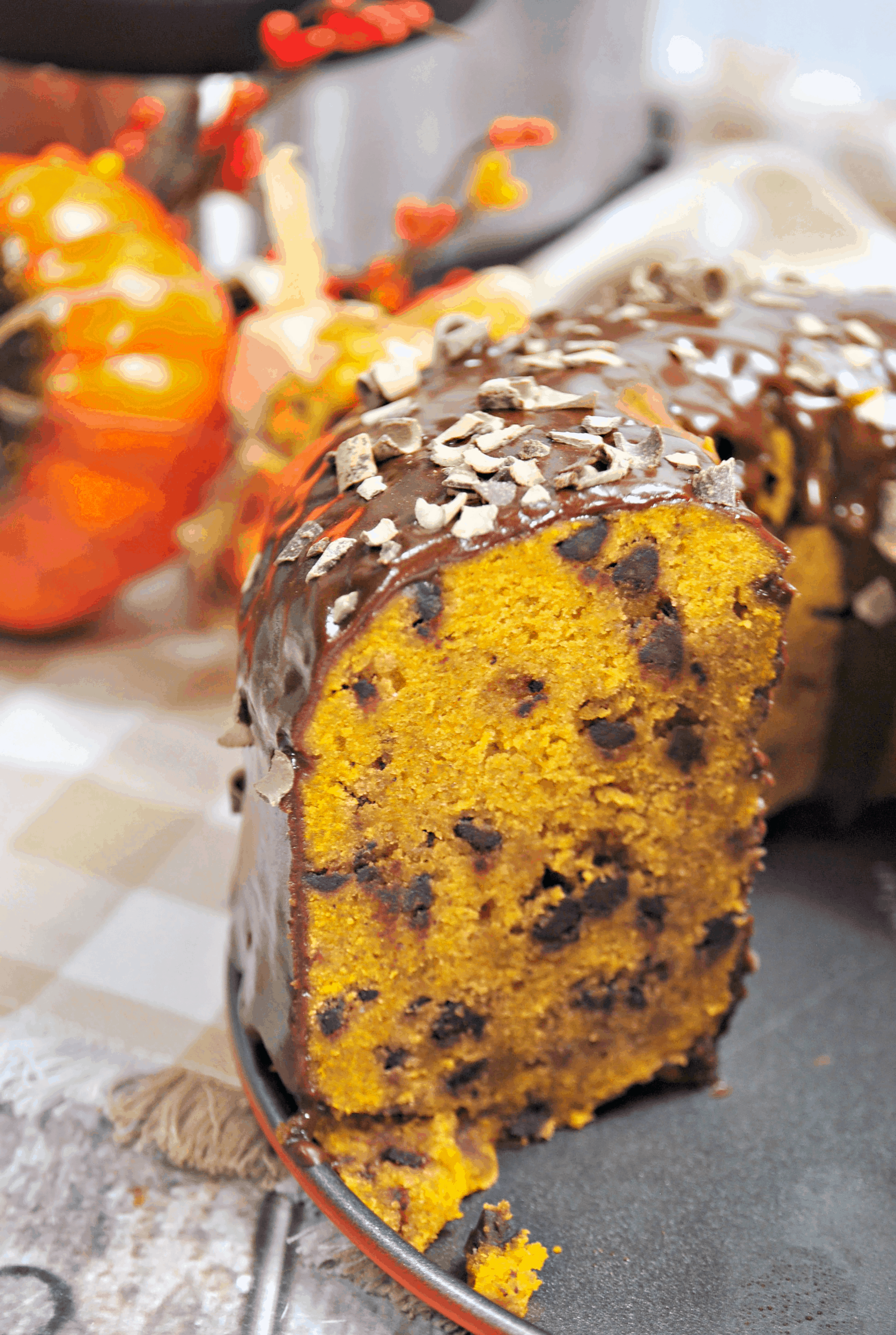 Instant pot Bailey’s cheesecake – here is another example of an amazing cheesecake that is rich and decadent. 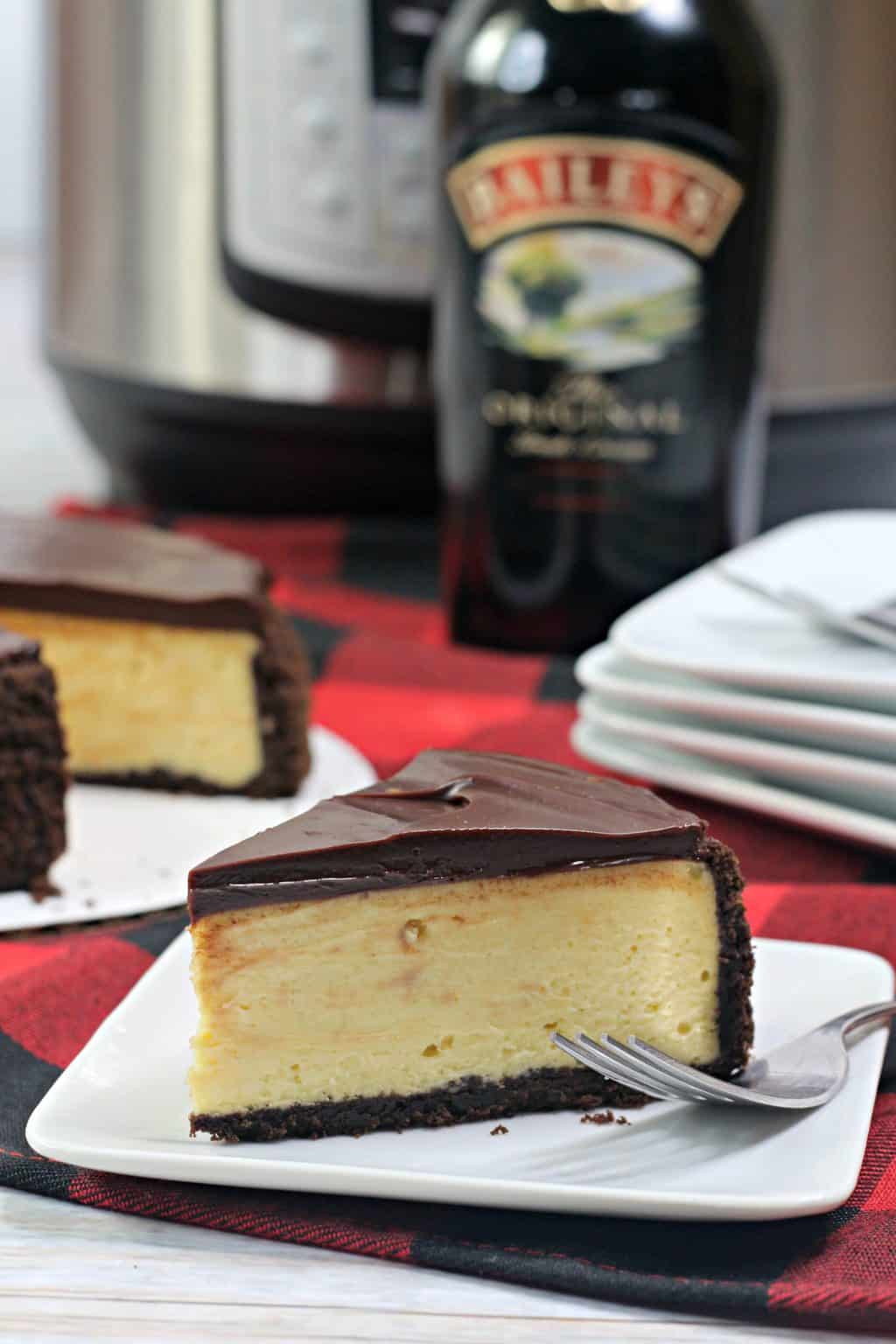 Instant pot Oreo cheesecake – if you love Oreos and cheesecake, this is the perfect dessert for you. 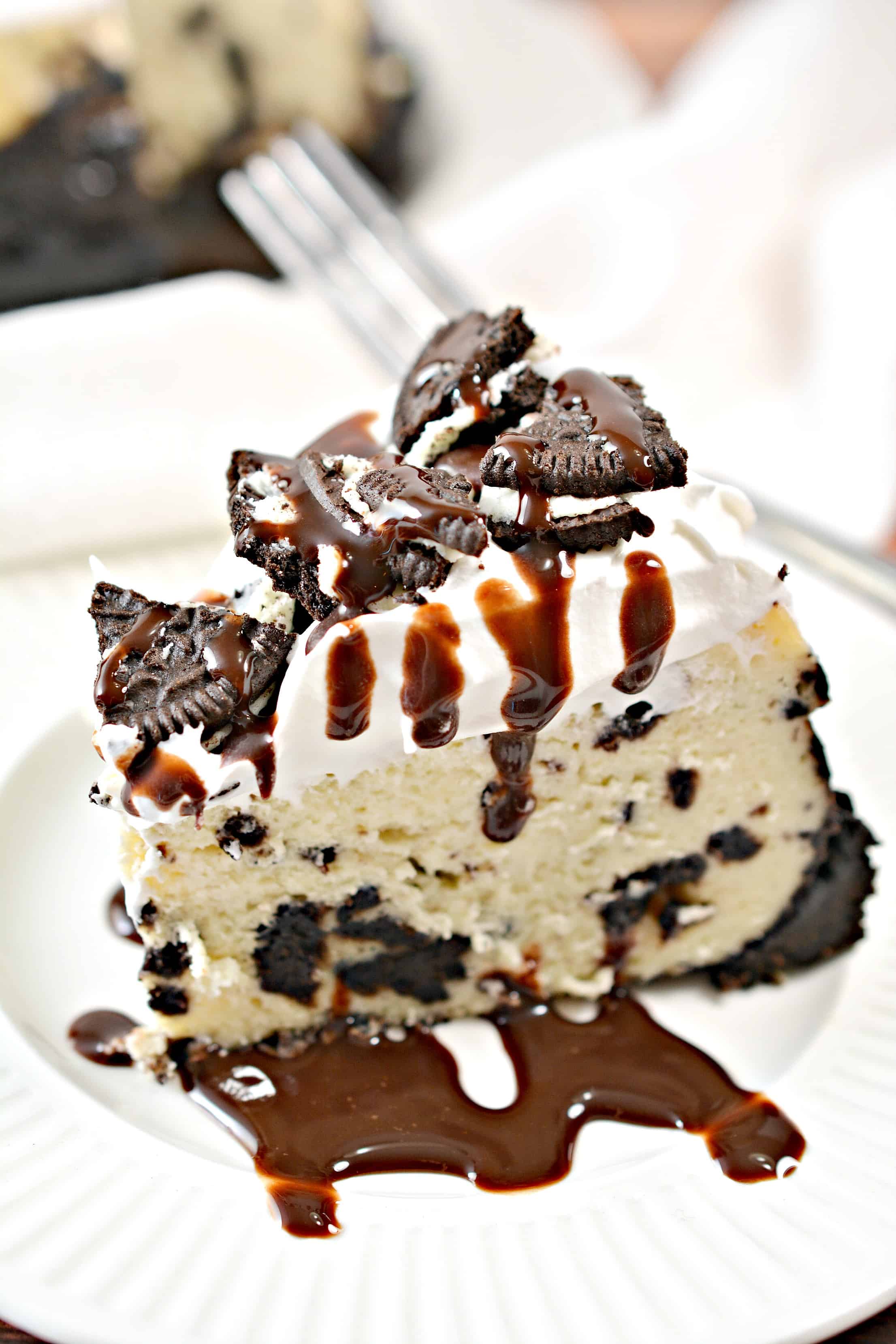