There are few things as satisfying as good beans and ham hocks recipe. The rich, smoky flavor of the ham hocks combined with the creamy beans is simply heaven on a plate.

I always look forward to making this dish – it’s one of my family’s favorites. I usually start by soaking the beans overnight, then simmering them until they’re nice and soft. The ham hocks go in next, followed by some garlic and onion.

I was skeptical of this recipe at first. Beans and ham hocks? Really? But I decided to give it a try anyway, and I’m so glad I did! The beans turned out to be delicious, with the perfect amount of smokiness from the ham hocks. This is now one of my go-to recipes for a quick and easy weeknight meal.

The key to this recipe is to let everything cook slowly so that the flavors can really blend together. After a few hours, I’ll add some salt and pepper to taste. And that’s it – dinner is ready!

So why not give it a try? I promise you won’t be disappointed!

The smoky flavor of the ham hocks really shines through, and the beans are nice and creamy. This is a great dish to serve for a crowd, or you can pack it up for a quick and easy meal on the go.

The next time you’re looking for an easy and delicious meal, try this beans and ham hocks recipe. You won’t be disappointed!

The shank is a tougher cut of meat than the hock and it needs to be cooked for a longer time to be tender. Ham hocks are also tough, but they cook faster than ham shanks. Ham shanks are usually smoked or cured, while ham hocks can be smoked, cured, or boiled.

Ham shanks are more expensive than ham hocks, but they are a more flavorful cut of meat. Ham hocks are often used in soups and stews because they add flavor and richness to the dish. Ham shanks can also be used in dishes like this, but they are not as common.

Are ham hocks and beans healthy?

What seasonings go good in beans?

Beans are a versatile food that can be enjoyed in a variety of ways. They can be cooked with or without ham hocks, and they can be seasoned with a variety of spices to give them a unique flavor. Here are some of the most popular seasonings that are used in beans:

How Do You Make Beans Cooked with Ham Hocks:

Step 1. Fit a pot with water and bring to a boil. Remove the pot from the heat, pour in the beans, and soak for 2 hours.

Step 2. Add 2 liters of water to a large pot along with the ham hock

Step 4. Bring to a boil, reduce to a simmer, cover and cook for 1 hour.

Step 5. Add the onions, celery, and carrots to the olive oil in a skillet over medium heat.

Step 7. Add the vegetables and drained beans to the ham hock broth. Bring to a boil and simmer covered for 40 minutes.

Step 8. Remove the ham hocks, cut off any meat there may be, and return the meat to the pot. Discard the rest of the ham hock.

Step 9. Serve with salt and pepper to taste as well as parsley for garnish.

What to Serve With Bean Soup

One of the great things about ham hocks is that they’re so versatile. They can be used in a wide variety of dishes, including this easy beans and ham hocks recipe. This dish is perfect for a winter meal, especially when served with some cornbread or biscuits.

If you’re looking for something to serve with your beans and ham hocks, there are a number of options.

Whatever you choose, the ham hocks will add flavor and substance to your meal.

How to Store and Freeze This Soup

This soup freezes well, so it can be made in advance and stored in the freezer.

What kind of beans go with ham hocks?

If you’re looking for a classic combination, try black-eyed peas and ham hocks. This dish is popular in the American South, and it’s known for its delicious, savory flavor.

Navy beans are another great option for pairing with ham hocks. They have a mild flavor that goes well with the smokiness of the meat, and they also tend to hold their shape well when cooked.

If you’re looking for something a little different, pinto beans make a great choice. They have a slightly sweet flavor that pairs well with salty ham hocks, and they also have a nice creamy texture.

Are ham hocks high in sodium?

Ham hocks are a great way to add flavor to black beans or any other type of bean dish. But are ham hocks high in sodium?

The answer is yes, ham hocks are high in sodium. In fact, a one-ounce serving of ham hocks contains 350 milligrams of sodium. That’s more than 14 percent of the daily recommended intake for sodium.

So if you’re watching your salt intake, you may want to avoid ham hocks. But if you don’t mind the extra sodium, ham hocks can add a lot of flavor to your beans.

Prep Time: 20 minutes
Cook Time: 1 hour 40 minutes
Total Time: 2 hours
Servings: 8
There are few things as satisfying as good beans and ham hocks recipe. The rich, smoky flavor of the ham hocks combined with the creamy beans is simply heaven on a plate. 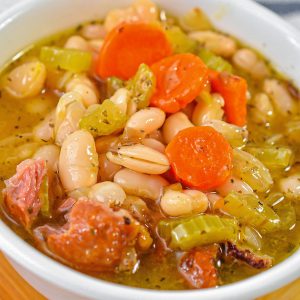 Slow Cooker Ham, Green Beans and Potatoes – This easy slow cooker recipe cooks up in one big crockpot (or soup pot), and it only requires only three main ingredients.