There’s nothing quite like the feeling of taking a bite of a freshly-baked brownie. The rich, chocolatey flavor, the moist and fudgy texture… it’s an experience that is truly hard to beat. But what if I told you that there was a way to make brownies even better? Enter: banana pudding brownies. This delicious recipe combines the classic taste of brownies with the creamy sweetness of banana pudding, creating a dessert that is truly irresistible.

Trust me, once you try these brownies, you’ll never go back to plain old chocolate brownies again.

Whether you’re looking for a new dessert to add to your rotation or you’re in need of an easy potluck dish, these brownies are sure to satisfy you.

Plus, they’re gluten-free and dairy-free, making them a perfect option for those with dietary restrictions.

With layers of banana and chocolate, these brownies are sure to be a hit with everyone. Plus, they’re super easy to make – perfect for a quick and delicious dessert!

What are you waiting for? Go ahead and try the recipe! Let us know how it turns out. We hope you enjoy these Banana Pudding Brownies as much as we do. 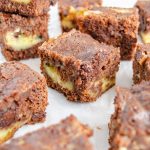 This Banana Pudding Brownies takes your classic brownie and adds a layer of banana pudding in the middle.

Why do I love this recipe?

Where is banana pudding from?

Banana pudding is a delicious dessert that originates from the southern United States. This dish is made by layering banana slices, vanilla pudding, and wafers in a dish and then refrigerating it until it is time to serve.

This recipe for banana pudding brownies takes the classic dessert and turns it into an irresistible treat that is perfect for any occasion. The banana pudding filling is rich and creamy, while the brownie base is moist and fudgy. These brownies are sure to be a hit with everyone who tries them!

When do bananas go brown?

Bananas go brown when they’re overripe. You can tell a banana is overripe when the skin is brown and spotted. Once bananas become overripe, they’re no longer good for eating fresh. But that doesn’t mean you have to throw them away! Overripe bananas are perfect for baking with.

Why are my brownies not gooey?

Why are my brownies not gooey? This is a question that I get asked a lot, and it’s usually because people don’t understand the science behind making brownies. Brownies are made with chocolate, which contains cocoa butter. Cocoa butter is what gives brownies their signature dense and fudgy texture. When melted, cocoa butter forms a smooth, glossy liquid.

When cocoa butter is combined with sugar and eggs, it creates a stable emulsion that helps to trap air and create a foam-like structure. This is what gives brownies their light and airy texture. The key to making gooey brownies is to not overmix the batter. Overmixing will result in tough brownies. So, if you want gooey brownies, be sure to mix the batter just until the ingredients are combined.

Why did my brownies turn cakey?

There are a few reasons why your brownies might turn out cakey rather than fudgy. One possibility is that you overcooked them. Brownies should be removed from the oven while they’re still slightly undercooked in the center; otherwise, they’ll continue cooking and become dry and crumbly.

Another reason for cakey brownies is that you didn’t use enough chocolate. Brownies are all about the chocolate, so be sure to use a good quality brand. You should also use the type of chocolate called for in the recipe. If a recipe calls for semisweet chocolate chips, don’t substitute milk chocolate chips or unsweetened cocoa powder.

There are a few key factors that will make your brownies moister and more delicious. One is to use ripe bananas in your banana pudding brownie recipe. This will add natural sweetness and moisture to the mix. Another tip is to not overmix the batter. Overmixing can result in dry, tough brownies. Finally, be sure to bake the brownies until they are just set. overcooked brownies will be dry and crumbly.

Most brownie recipes call for melted chocolate, which not only adds flavor but also contributes to the chewy texture. Brown sugar is also a key ingredient in creating chewy brownies – the molasses in brown sugar help to keep the brownies moist and chewy. Finally, using less flour will also result in a chewier brownie. This banana pudding brownie recipe has all of these key ingredients, plus the addition of bananas for an extra dose of deliciousness!

What makes a brownie fudgier?

The answer to both of these questions is simple: more bananas! These Banana Pudding Brownies are packed with banana flavor, thanks to not one, but two whole bananas in the batter. And to really take them over the top, we’ve added a layer of banana pudding in the middle. So if you’re looking for a delicious, fudgy brownie that’s full of banana flavor, this is the recipe for you!

How to make Banana Pudding Brownies?

Step 2. Blend together the brownie mix, vegetable oil, 1 egg, and water in a bowl until smooth.

Step 3. In another bowl, beat together the cream cheese, 1 egg, and the milk until creamy.

Step 4. Mix the pudding into the cream cheese mixture until well combined.

Step 5. Spread half of the brownie batter into the prepared baking dish.

Step 6. Drop spoonfuls of half of the cream cheese and pudding mixture on top of the brownie batter, and use a knife to swirl it into the batter.

Step 7. Spread the rest of the brownie batter into the baking dish, and top with the remaining cream cheese and pudding mixture. Swirl again with the knife.

Step 8. Add 5 minutes to the baking time listed on the brownie box, and bake the mixture for that total length of time.

Step 9. Remove the brownies, allow them to cool, slice, and serve.

Not only does it add a delicious creamy flavor, but it also keeps the brownies nice and moist. Jump to printable recipe below!

How to store Banana Pudding Brownies?

For best results, store banana pudding brownies in an airtight container at room temperature. They will last for up to 3 days in the container. If you need to store them for longer, they’ll keep in the fridge for up to a week.

Can I freeze these Banana Pudding Brownies?

Yes, you can freeze these Banana Pudding Brownies. Just make sure to wrap them tightly in plastic wrap or aluminum foil to prevent freezer burn. When ready to eat, thaw the brownies overnight in the refrigerator before serving.

Can I make this recipe ahead of time?

Yes, you can make banana pudding brownies ahead of time. Just follow the recipe as directed and bake the brownies. Once they’re cooled, wrap them tightly in plastic wrap and store them in the refrigerator for up to 3 days. When you’re ready to serve, simply remove the plastic wrap and enjoy!

Prep Time: 20 minutes
Cook Time: 25 minutes
Servings: 12
Looking for a delicious way to use up those brown bananas? Look no further than this recipes for Banana Pudding Brownies! These rich, fudgy brownies are studded with chunks of banana and topped with a creamy pudding frosting. 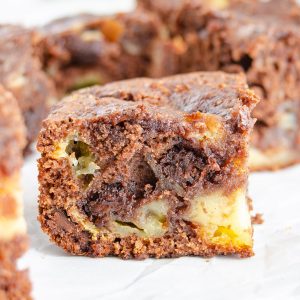 Cherry Cheesecake Brownies – A tasty twist on a classic brownie.