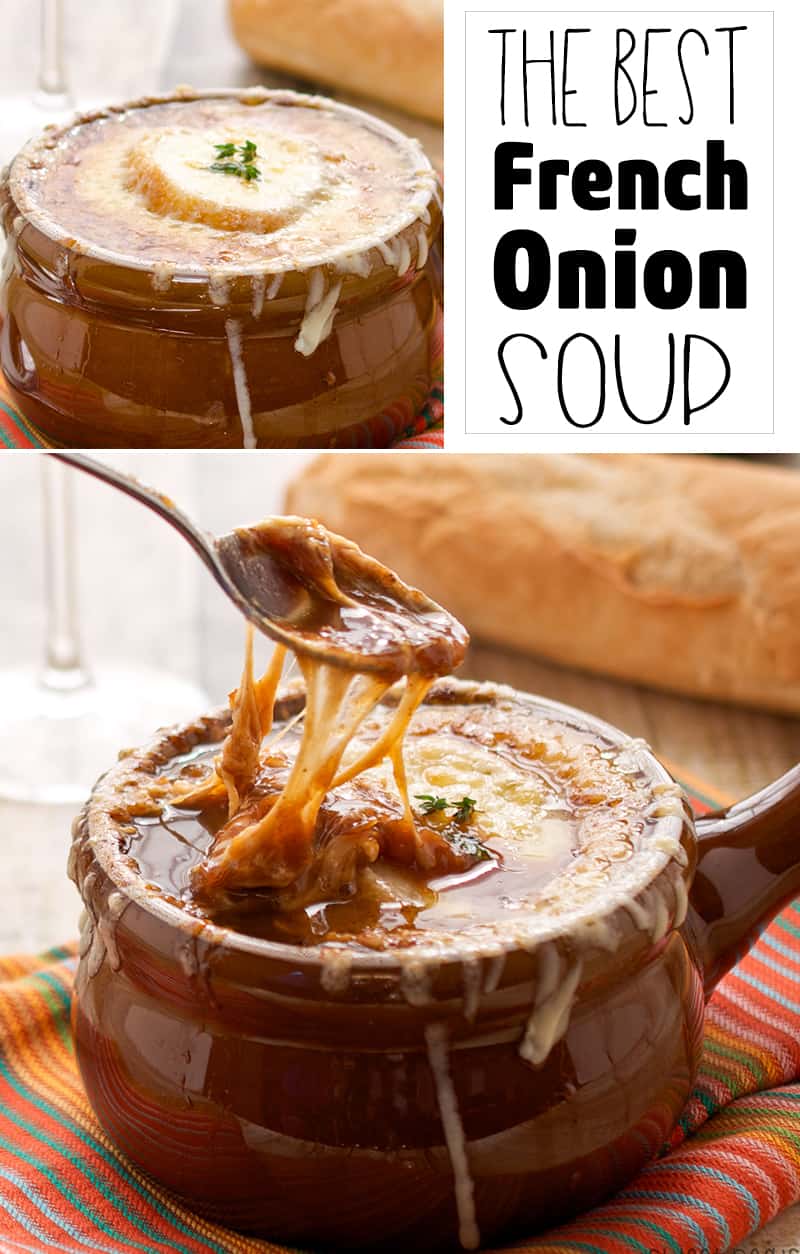 If you’ve been on the hunt for the Best French Onion Soup recipe, you’ve finally stumbled upon it! Not only is this super easy French onion soup, but it’s also absolutely divine! I get bored eating plain soup that is lacking flavor and character.

This classic French onion soup recipe is anything but boring. The explosion of flavor you get when the homemade French onion soup hits your mouth is out of this world. Whether you are looking for something to have as a light lunch, hot dinner to warm you up, or you want to give it to a family that just welcomed a new baby, this caramelized onion soup is a hit! You have to try it for yourself, but I am confident you will be so glad you made it. Then it can become a go-to soup recipe that the entire family devours just like at my house.

The ingredients in this traditional French onion soup are easy to find, which makes the soup even better! I hate going to the store with the list in hand, and I’m unable to find half the ingredients. This won’t be a problem with this easy onion soup recipe. 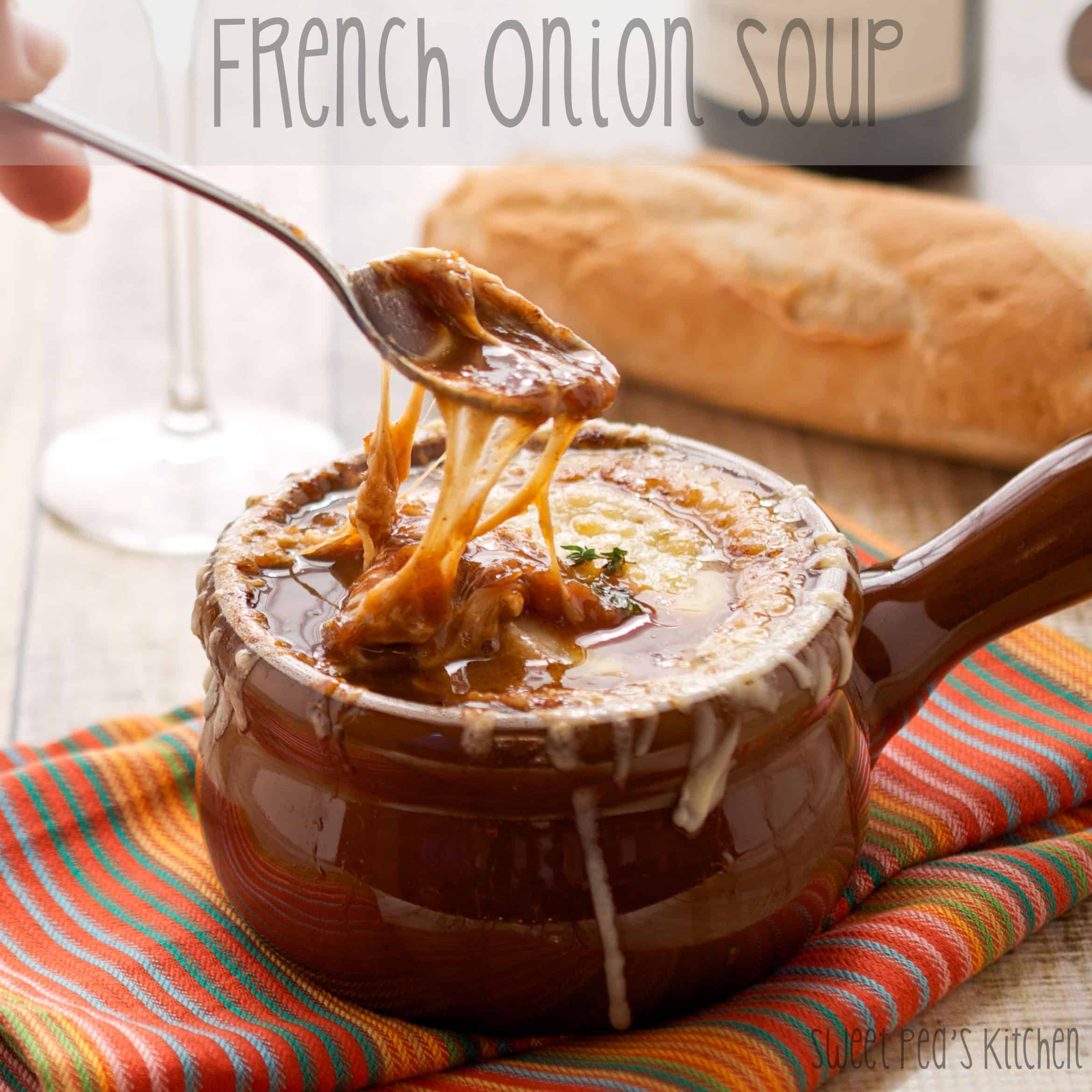 For the Cheese Croutons

How To Make French Onion Soup

This recipe is a bit time consuming, but the result is nothing short of amazing. From start to finish, it takes almost five hours. However, much of that time is inactive while the onions are braising in the oven.

First Step: Begin by heating the oven to 400 degrees F. Spray the bottom and inside of a large heavy-bottomed dutch oven with cooking spray, generously.

Second Step: Add butter with onions and salt in a pot and cook covered for 1 hour.

NOTE: The onions wilt and release moisture as they cook.

Fourth Step: After the onions are finished baking, remove the pot from the oven and begin cooking the pot over medium-high heat. Make sure to stir frequently and scrape the sides and bottom of the pot frequently until all the liquid has evaporated and the onions brown. After 15-20 minutes, reduce the heat to medium and continue cooking until the bottom of the pot is coated with a dark crust. This usually takes an additional 6-8 minutes. Adjust the heat as needed.

Fifth Step: Pour in 1/4 cup of water and scrape the bottom of the pot to loosen the crust. Continue cooking until the water has evaporated, and a new dark crust has formed. Continue repeating this process of deglazing 2-3 more times until the onions are very dark brown. Pour in the sherry and cook while frequently stirring until the sherry evaporates, which takes around 5 minutes.

Sixth Step: Pour in the chicken and beef broths, water, thyme, bay leaf, and salt into the pot. Scrape up the bottom and sides of the pot one more time. Increase the heat to high and bring it to a simmer. Once simmering, reduce the heat to low and cover for an additional 30 minutes. Remove the herb pieces and sprinkle in salt and pepper.

Seventh Step: As the soup is simmering, begin making the croutons by placing bread in a single layer on a baking sheet at 400 degrees. Cook for 10 minutes or until the bread is dry, crisp, and has golden edges and set aside.

Eight Step: Place the oven rack, so it’s 6 inches from the broiling element in your oven. Set broiler-safe crocks on a baking sheet filled with 1 3/4 cups of soup. Place 1 or 2 baguette slices in each bowl and sprinkle with cheese. Broil the homemade onion soup until the cheese has melted and is bubbly around the edges or for 3-5 minutes. Let the soup sit for 5 minutes to rest before serving.

There are several essential things you need to make a note of when making the best french onion soup. If you don’t follow these tips, you may end up with a mess on your hands that doesn’t taste too good. 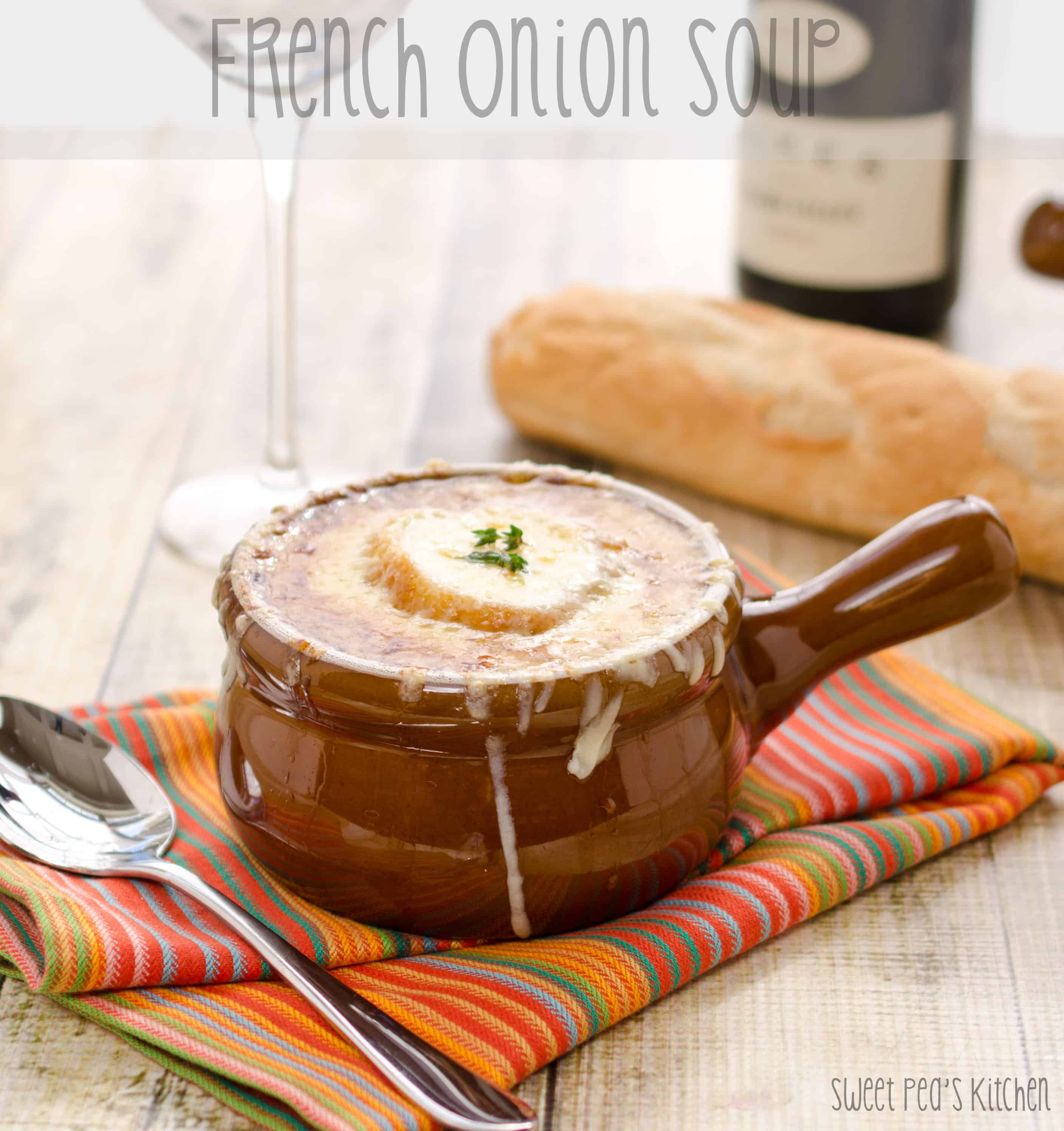 What Kind Of Onions Do I Need For This Homemade French Onion Soup?

One of the most critical aspects of this caramelized onion soup recipe. Always use yellow onions for this recipe. Do not use sweet onions such as Vidalia or Walla Walla, or the soup will be overly sweet. While it may sound good to have sweet soup, trust me when I tell you that it’s too sweet and not very palatable.

Stick with yellow onions when making this french onion soup, and you’ll have great luck every time.

This caramelized onion soup will last 3-4 days in the refrigerator. Place the soup in a glass or plastic airtight container with a tight-fitting lid. I like to package it in individual serving containers so I can have an easy to grab lunch when I’m on the go.

If you can’t eat the traditional onion soup within 3-4 days, then it’s a good idea to freeze it. After you spent so much time making it, you don’t want to waste it! Pour the soup in freezer-safe bags or another airtight container. If you choose to use freezer-bags, make sure to remove excess air and always label the bag, so you know what’s inside.

How Do I Reheat Caramelized Onion Soup? 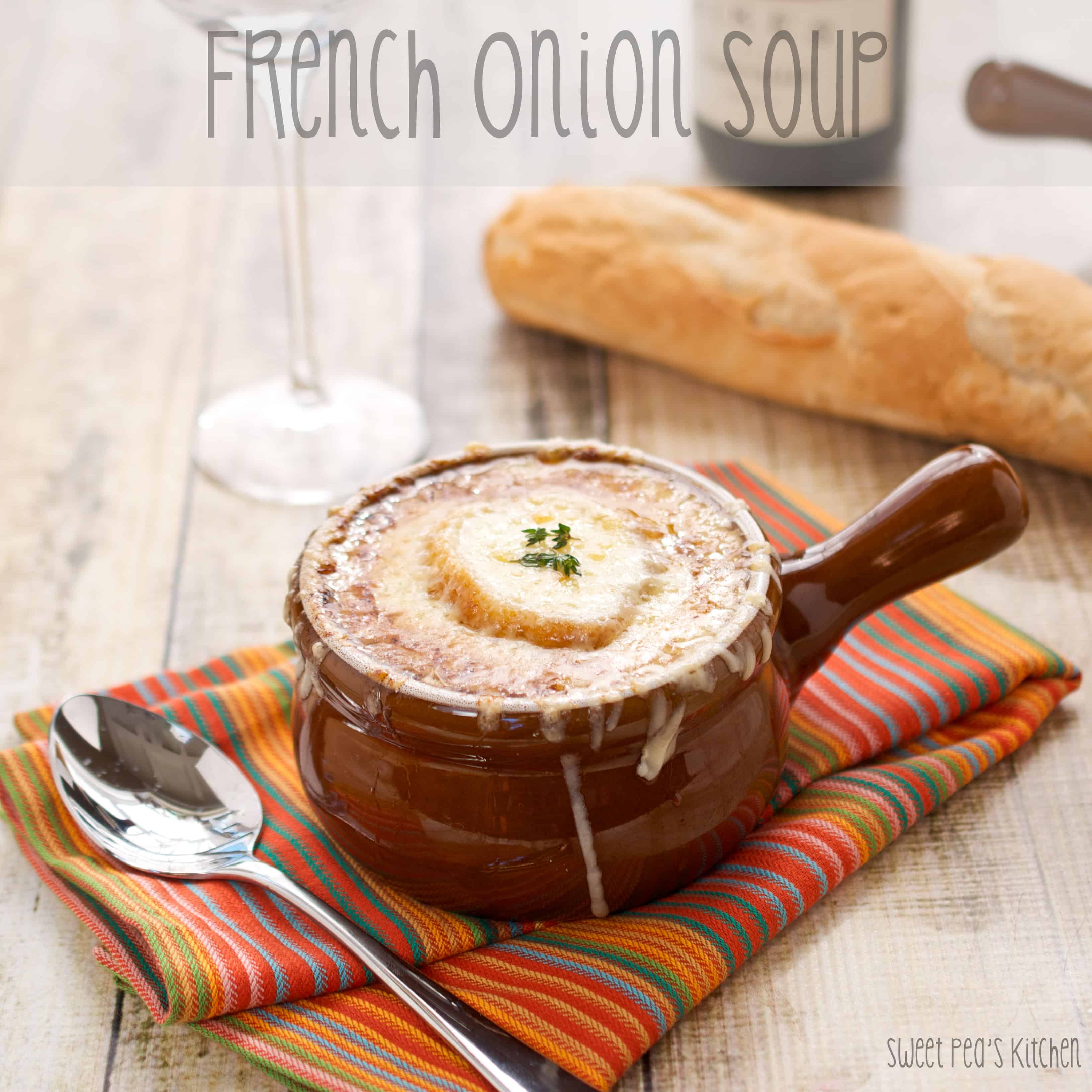 There is nothing more relaxing than sitting down and enjoying a warm bowl of freshly made soup. Check out these soup recipes for inspiration. 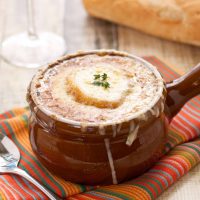 For the Cheese Croutons:

For the best flavor, make the soup a day or 2 in advance. Alternatively, the onions can be prepared through step 1, cooled in the pot, and refrigerated for up to 3 days before proceeding with the recipe.
Author: Laura

Make sure you check my best recipes below: 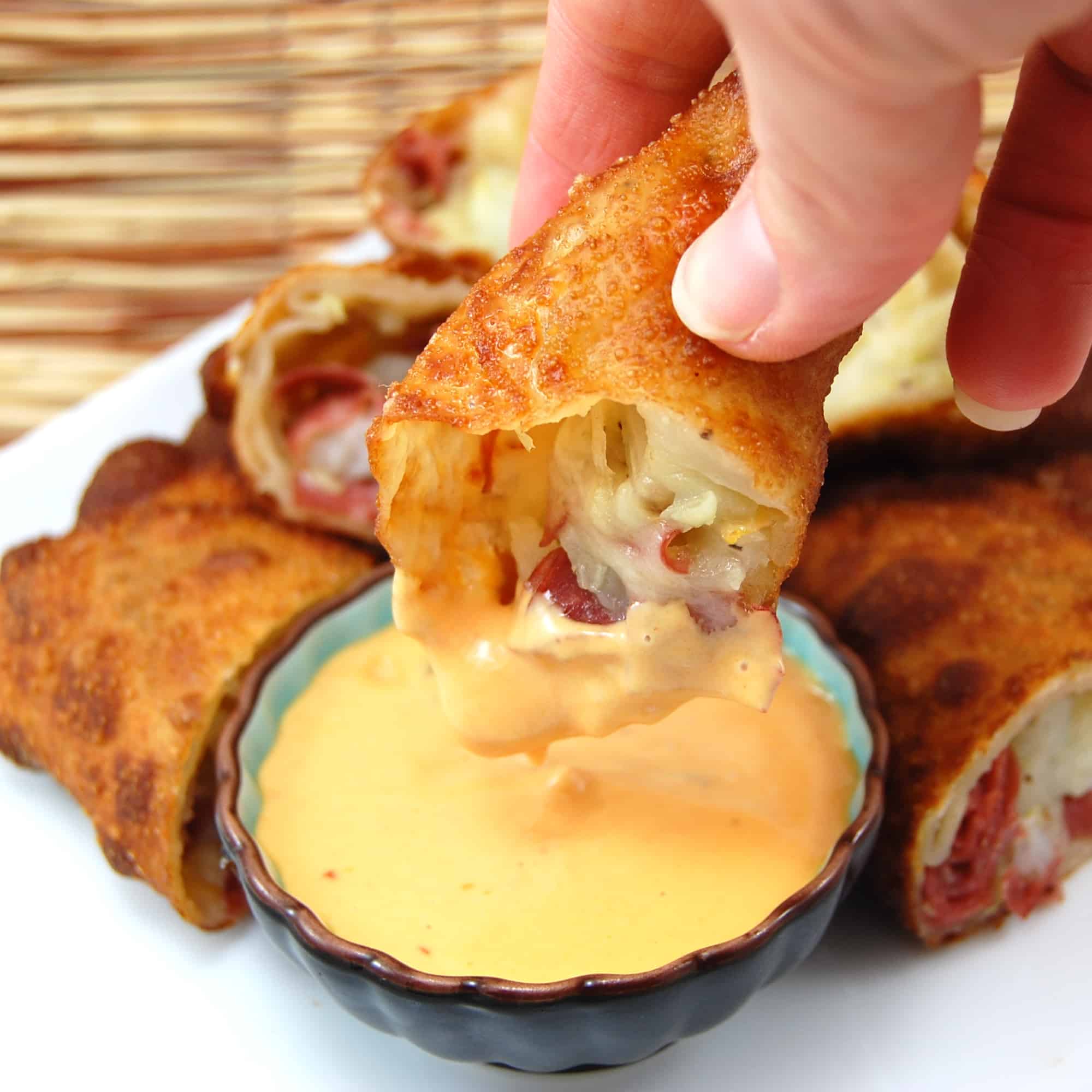 Best Instant Pot Cabbage Soup – It is the best beef cabbage soup recipe you can find. 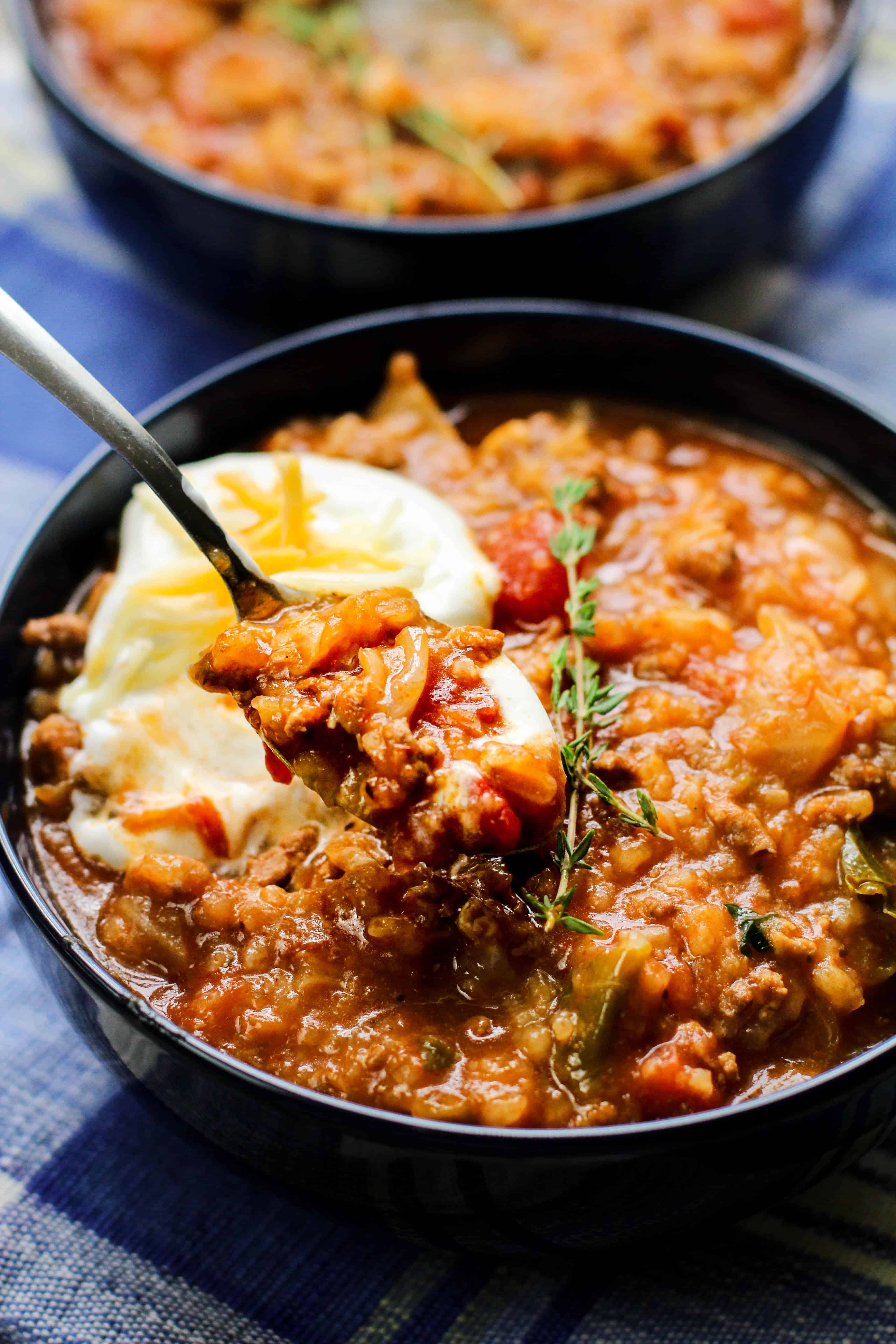 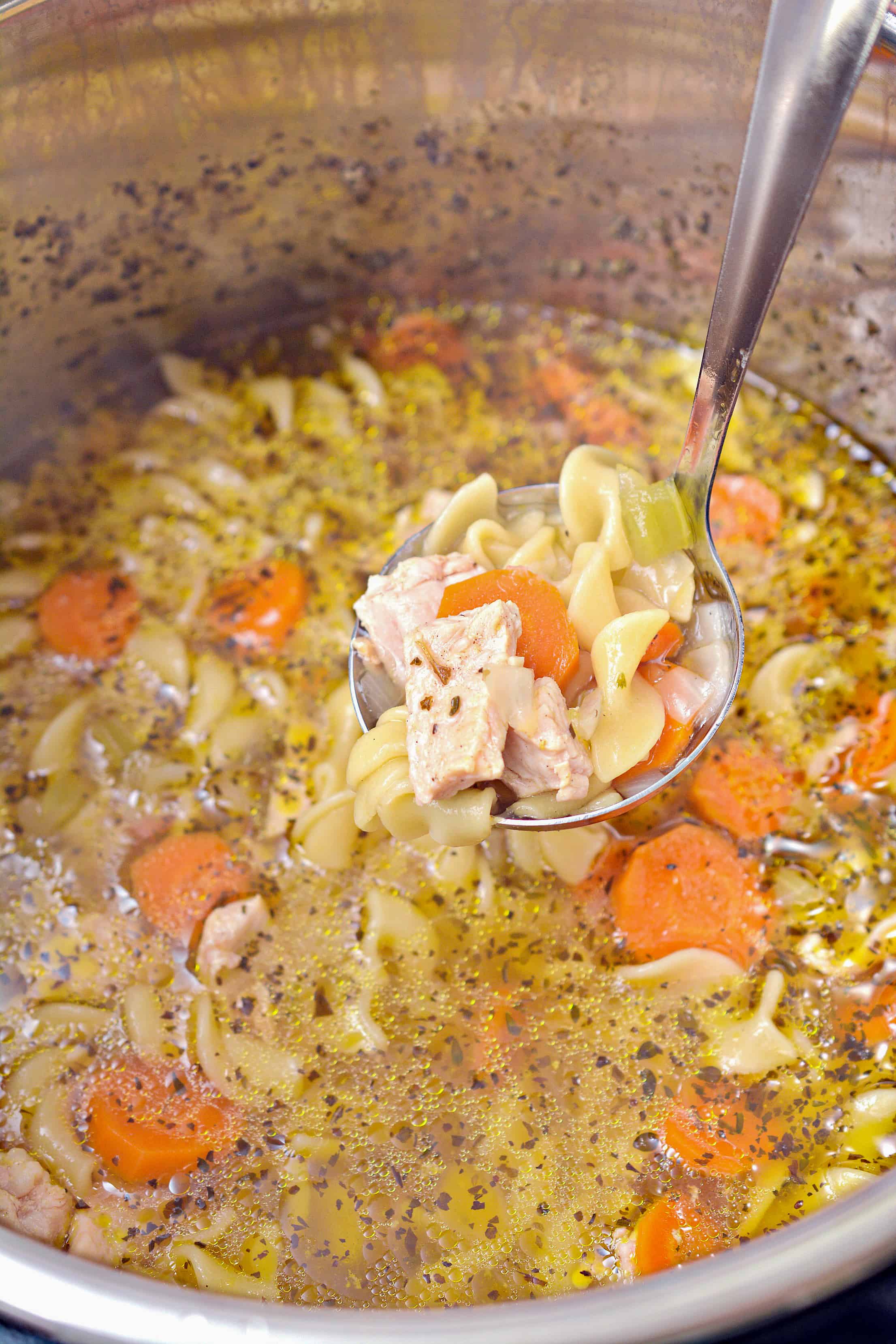 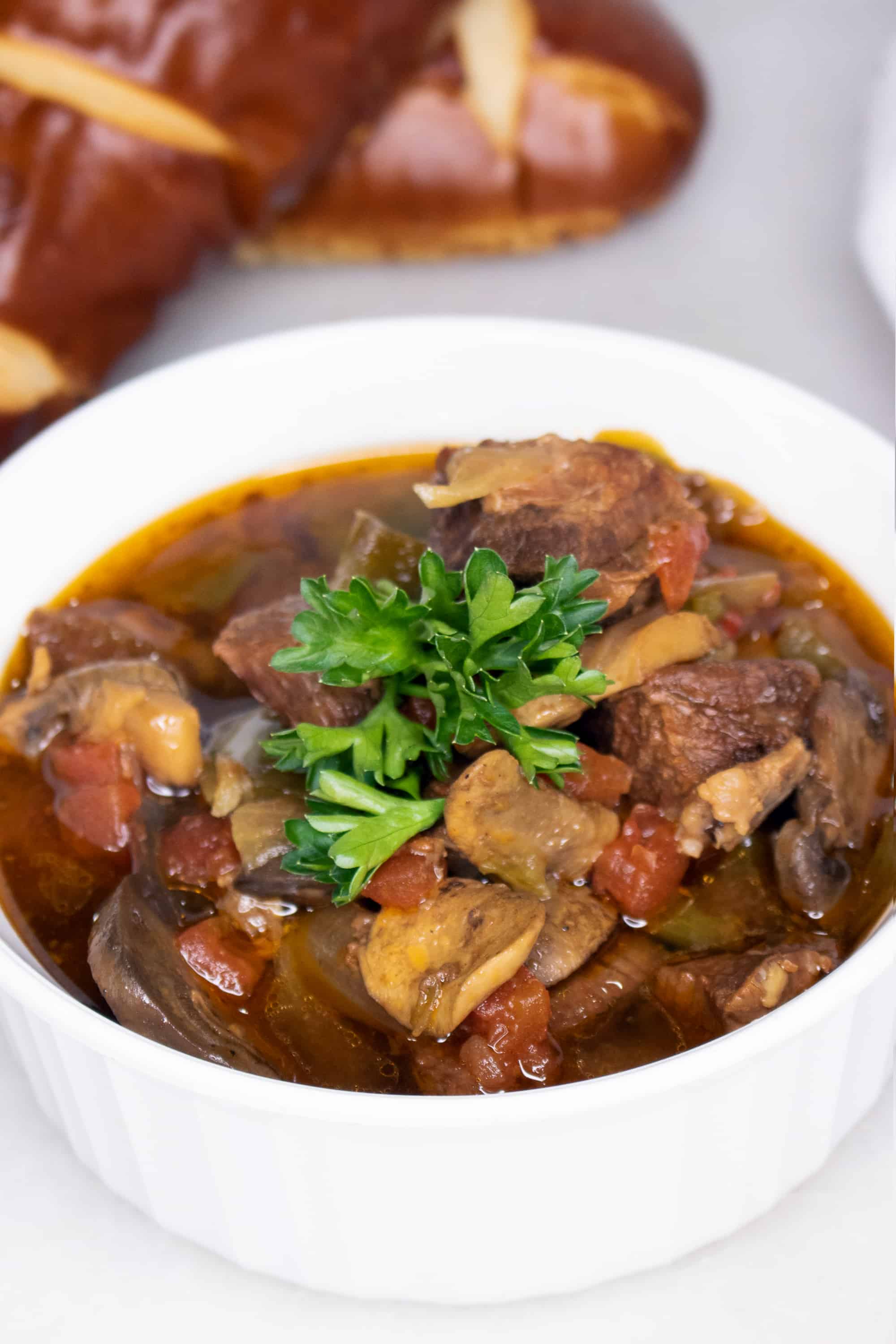