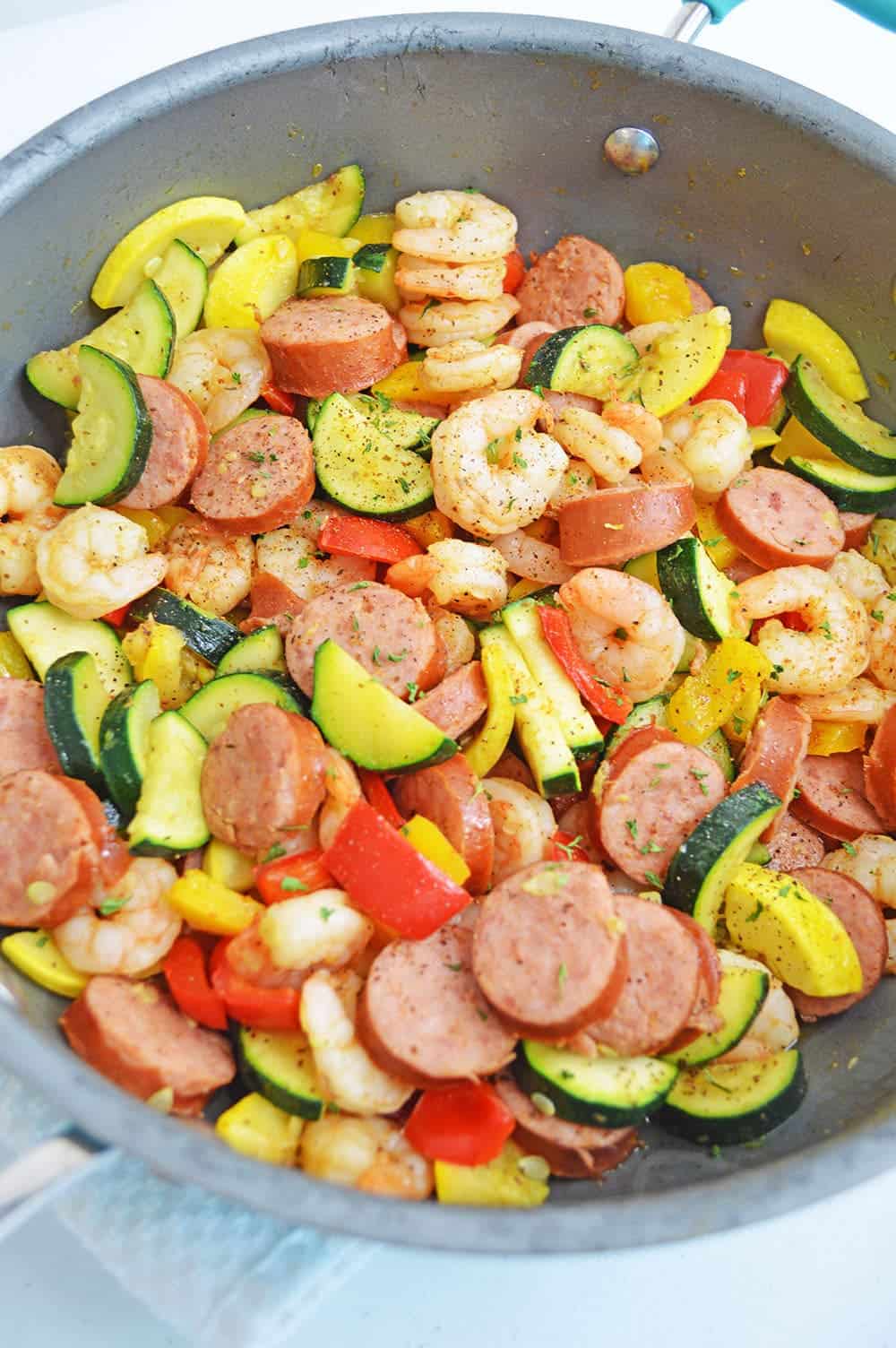 I believe that every mom should have a few easy skillet meals up to her sleeve. One skillet meals are typically not only quick and easy to make, but they don’t leave a big mess behind in the kitchen either. I don’t know about you, but when I get finished cooking dinner after a long, busy day, the last thing I want to do is spend another hour in the kitchen washing dishes. 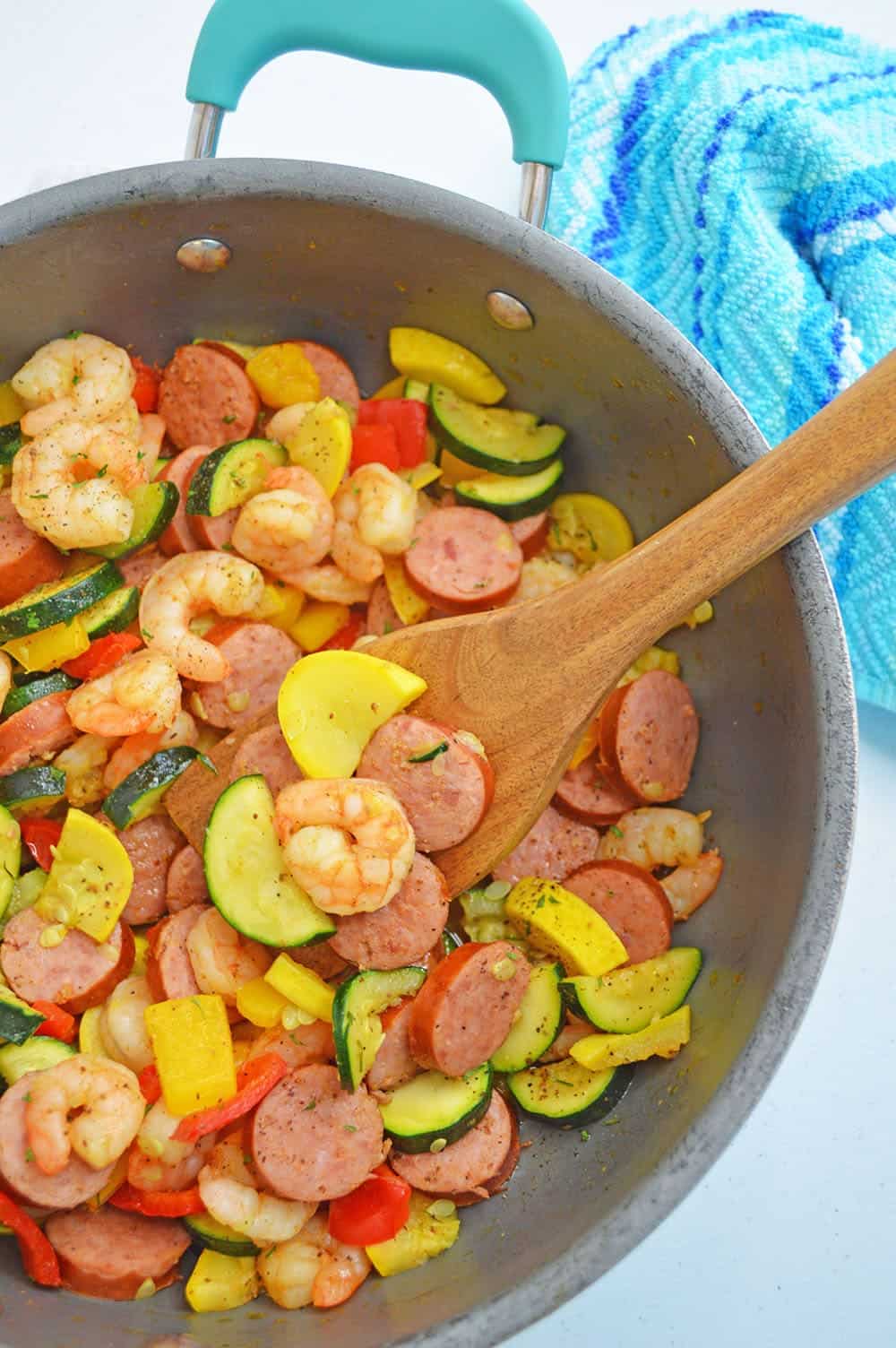 That’s where one skillet meals like this delicious Cajun Shrimp Sausage Skillet come in. As the name suggests, the entire meal is typically made in one dish, with the exception of a mixing or measuring bowl which I usually wash while the meal is cooking. When it comes time to clean up after dinner, there’s hardly anything left.

Speaking of flavor….this shrimp and sausage skillet is loaded with flavor, as you would expect from all tasty cajun recipes. The cajun seasoning and peppers definitely add a bit of spice, along with the smoked sausage, but the zucchini, squash, and shrimp keep it from becoming an overly spicy dish. If you like bland and boring, Cajun shrimp and sausage vegetable skillet is not for you, but I find that most taste buds appreciate it, including my kids.

As I mentioned, this shrimp and sausage skillet is one of my favorite easy shrimp recipes. I find shrimp easy to cook (just make sure not to overcook it!) but everyone always seems to think it’s fancier than it is, making it an ideal dinner to serve guests.

I actually serve this Cajun shrimp recipe to dinner guests in the summer because it’s such a light but still a hearty and flavorful meal that comes with virtually no clean-up. Guests always love it and ask for the recipe. Plus, since it’s an easy skillet meal, the limited clean-up means that I get to spend more time socializing with my guests instead of washing dishes.

While this one-skillet meal is satisfying enough to serve as a complete meal, you could serve it over rice or noodles. However, I typically put together a quick tossed salad and serve this shrimp and sausage skillet as the main course. If love one skillet meals or Cajun recipes in general, you need to try this Cajun Shrimp Sausage Skillet.

I am so excited to teach you how to make this shrimp and vegetable recipe! I seriously can’t get enough of it, and I have a feeling you will be the same way! So yummy! Plus, the presentation is gorgeous because it is full of vibrant bright colors! 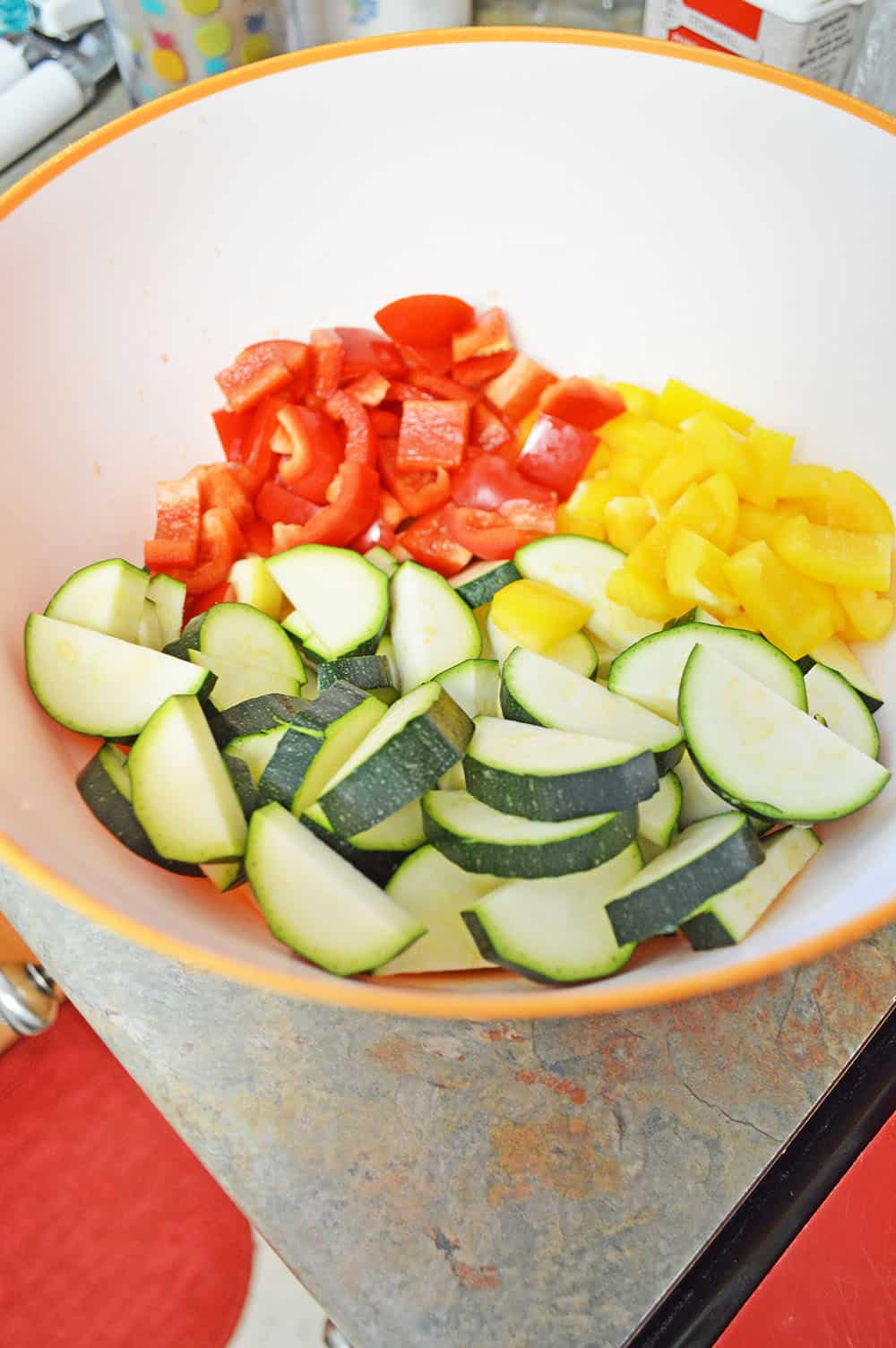 Chop all vegetables. I like to slice the zucchini a little thicker because if it gets done before the other veggies, it tends to get a bit slimy. Then slice smoked sausage. 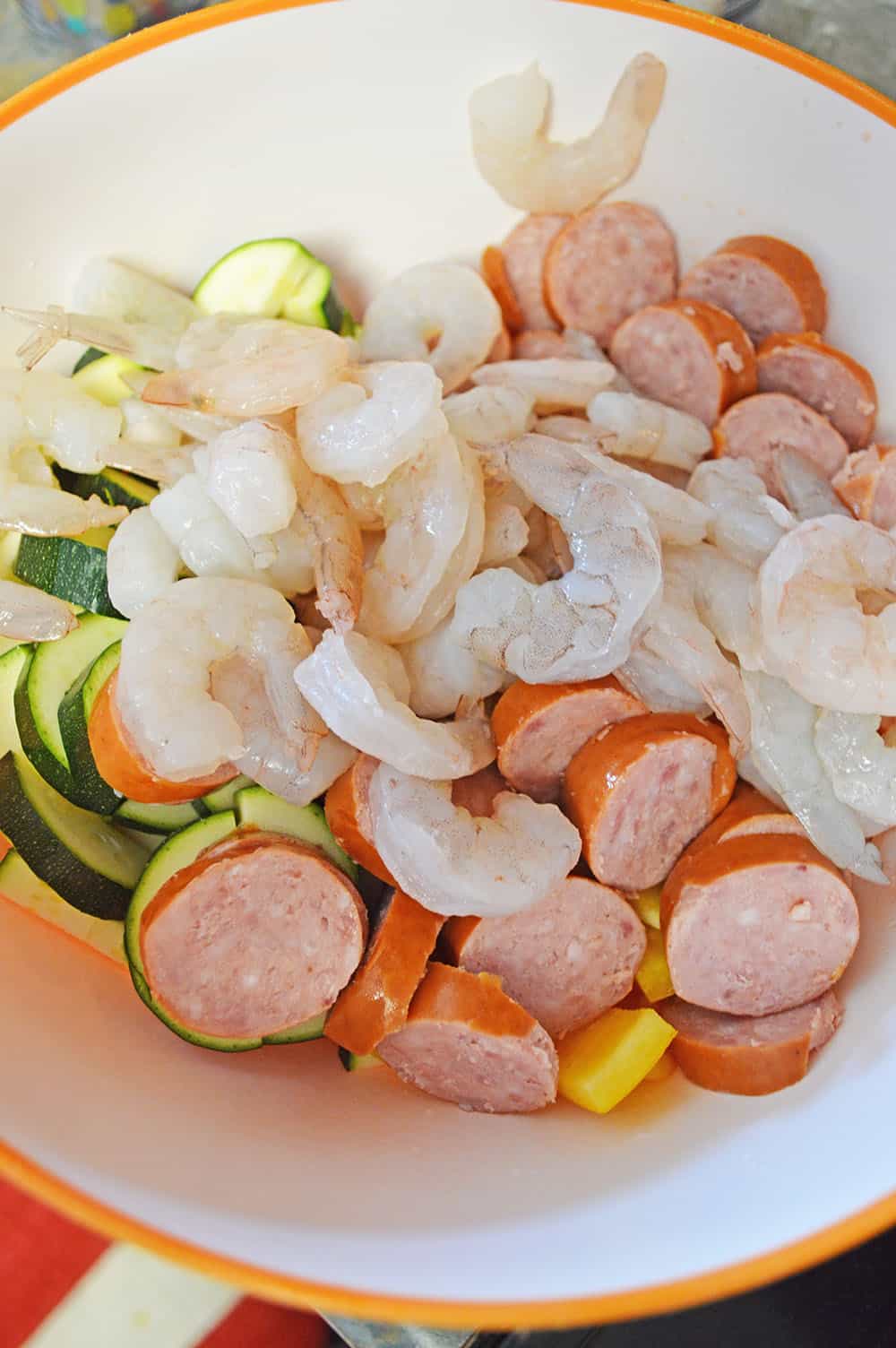 Add all ingredients in a large bowl. Combine with seasonings. This is the point you would need to add any additional ingredients you want to include in this Cajun shrimp recipe. 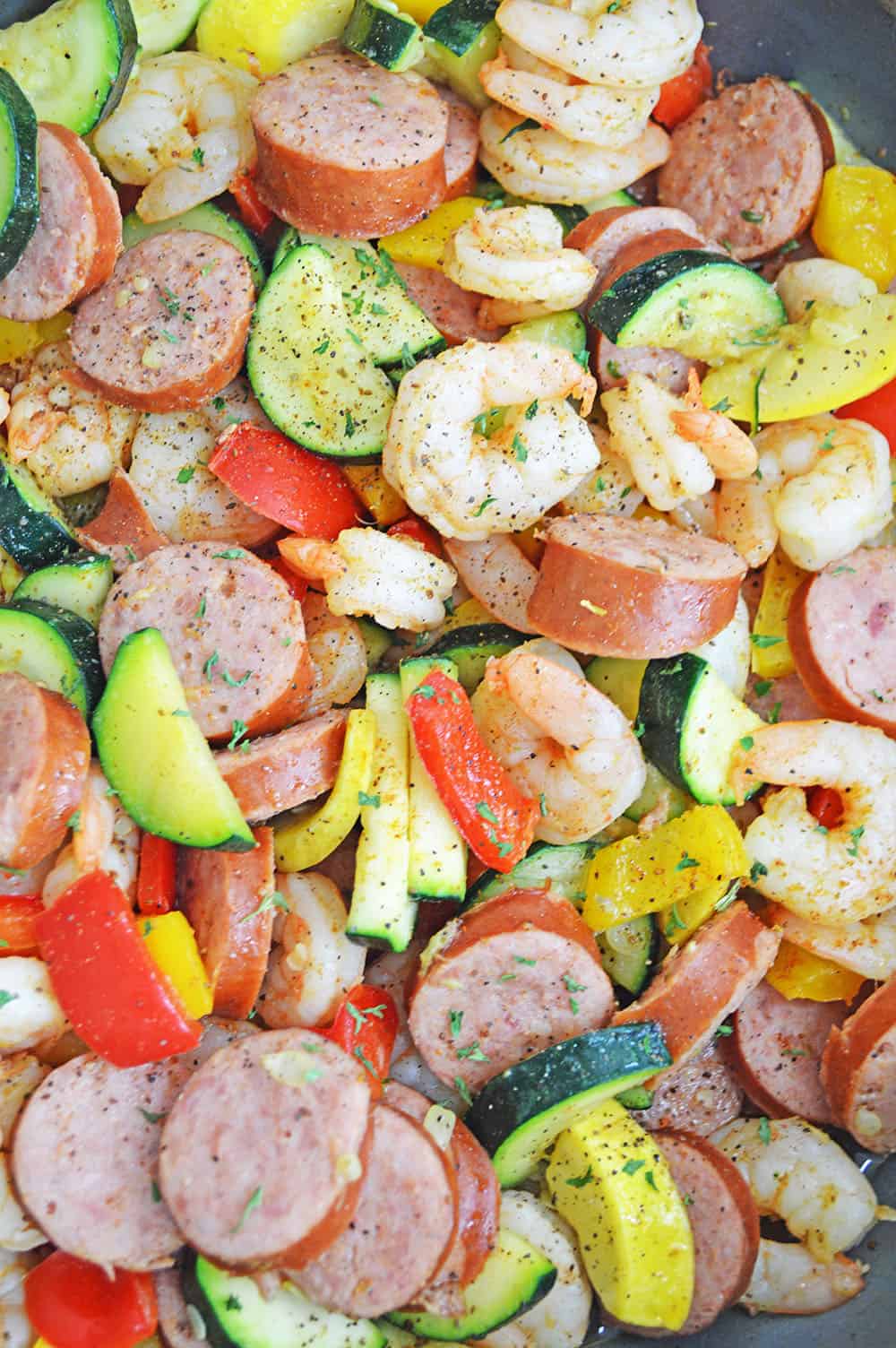 Cook in a skillet approximately 10-12 minutes until veggies are soft and shrimp is pink. You will notice the entire house is smelling very fragrant and you are probably starving by now! Good news, it’s ready to eat so grab a fork and dig in!

TIP: Don’t overcook the shrimp because it will become really tough and chewy. You can still eat it when it’s overcooked, but it won’t be that appealing. 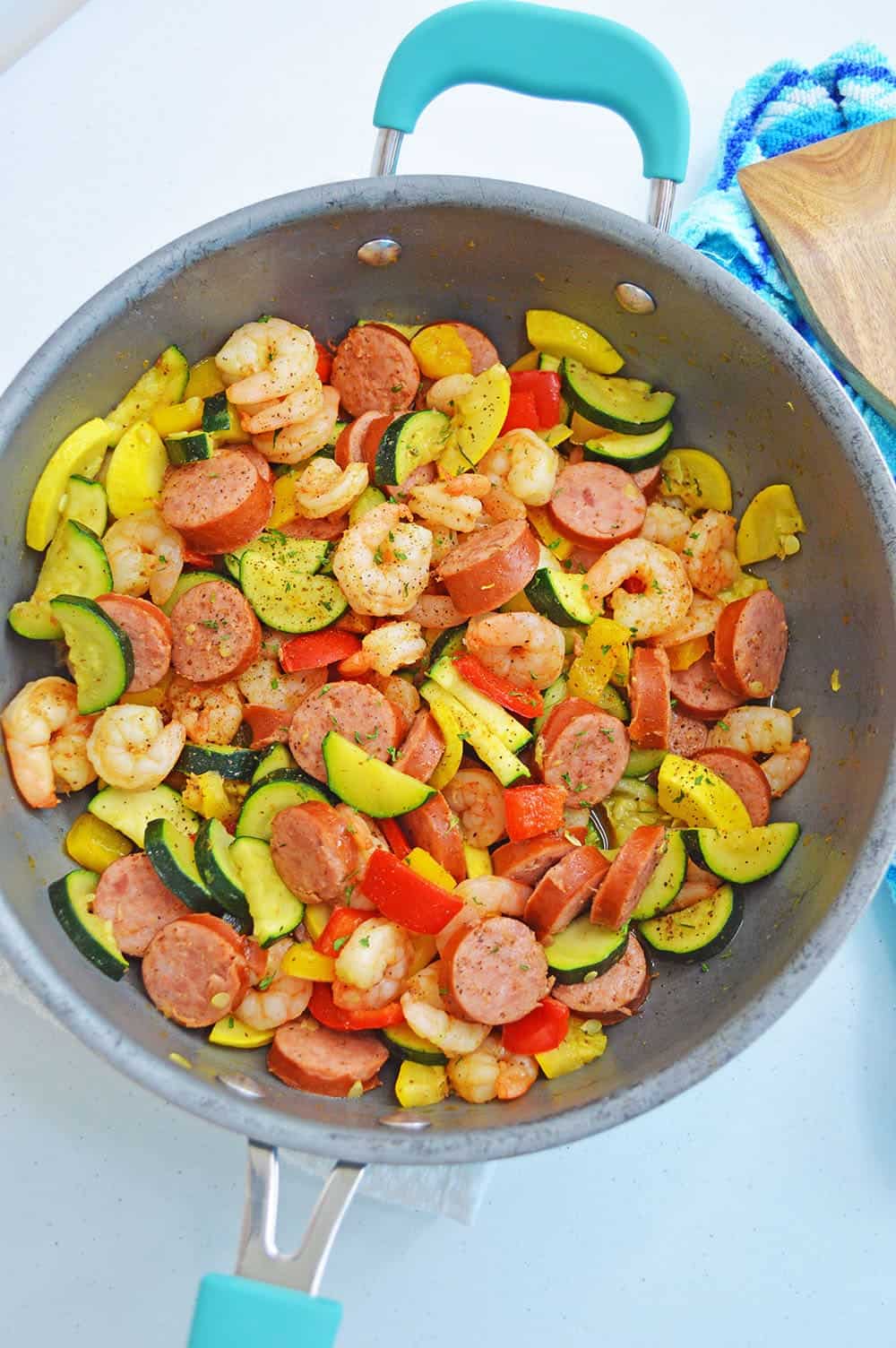 There are so many tasty ways to serve skillet shrimp! The recipe I have given you is the most common way I make it, but I wanted to provide you with some other ideas that I have tried, or I think sounds good:

Can I Use Frozen Shrimp To Make Cajun Style Shrimp?

Yes, you can use frozen shrimp. Sometimes frozen shrimp is so much cheaper than fresh, so I totally get trying to cook healthy without breaking the bank! There are a few things to keep in mind if you don’t use fresh shrimp.

I prefer to make this Cajun shrimp and sausage vegetable skillet with raw shrimp. You can defrost raw frozen shrimp by placing it in a bowl with cold water. Never use hot water because it will begin cooking the shrimp and the result is a rubbery yucky shrimp that you won’t like. After the shrimp has defrosted, you can peel the skin off. Typically, when you buy shrimp frozen, it’s already deveined so you shouldn’t have to worry about that step.

If you buy precooked frozen shrimp, it is already going to be pink. Your best bet is to cook the vegetables with seasonings first and when they are almost done, toss in the defrosted shrimp. Otherwise, there is no way to get all the ingredients done at the same time.

Can I Grill Cajun Shrimp And Sausage?

Yes, you can grill cajun shrimp and sausage if you would prefer. You can use a grill safe pan and put all the ingredients and seasonings in the pan. Take special care to keep it stirred frequently, so it doesn’t burn or get overcooked.

Another option is to make shrimp and sausage boil packets with aluminum foil. Just fold the aluminum foil to make a square and put the ingredients inside. I like to toss a little bit of butter in the packet too.

How Do You Store Cooked Shrimp In The Refrigerator?

Store leftover cajun shrimp and sausage in an airtight container, and you can put it in the fridge for up to 3-4 days. Never eat old shrimp because it can make you very ill. Reheat it in the microwave, on the stovetop or in the oven. Just warm it enough to make it hot, so it doesn’t dry out or cause the shrimp to get tough.

You will notice if there is a robust fish-like smell, mold or ammonia smell, then it needs to be thrown out. Additionally, if the shrimp and sausage seem slimy or extra watery, then it’s not good anymore. Bacteria has set in and is growing, and it’s not safe to consume at this point.

Can I Make Cajun Shrimp Ahead Of Time?

Yes, this cajun sausage and shrimp dish is perfect for making ahead of time. Occasionally, when I have time to plan ahead, I will make cajun shrimp and sausage vegetable skillet ahead of time, and we eat it for lunch for a few days.

You can also freeze cooked shrimp and sausage. It will last around 6-9 months if stored properly. To reheat either toss it in a skillet with a little bit of oil and cook until heated through then serve. You can also place the skillet shrimp in a microwave-safe dish with a tablespoon of water, then cover and heat until its hot.

What To Make With Cajun Shrimp And Sausage

To me, the most significant advantage of making cajun shrimp with sausage is that that you don’t have to cook anything else with it. Sometimes if you are having friends over and want to serve a bigger meal, here are a few ideas of what to serve with it:

This Cajun shrimp recipe is so versatile that you can eat it for all occasions and with any of your favorite vegetables. You can’t go wrong. Can’t wait to hear what you think about it!

This Cajun Shrimp Sausage Skillet is one of my favorite easy shrimp recipes, along with one of my favorite one-skillet meals. Packed with veggies, it’s low in carbs and full of flavor. A must-make for anyone who loves Cajun recipes!

Now, time to pin this delish and easy shrimp and sausage skillet recipe for later:

Have you tried Cajun Shrimp Sausage Skillet Before? 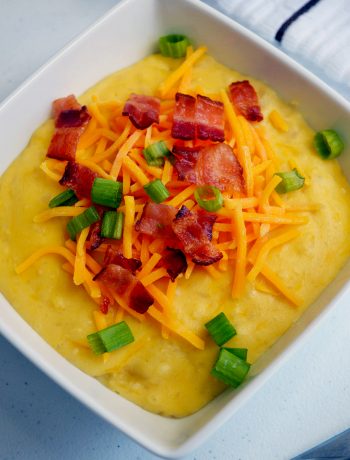 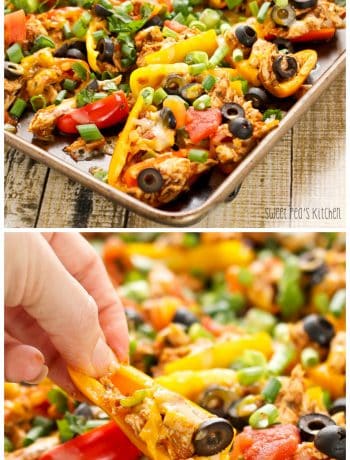 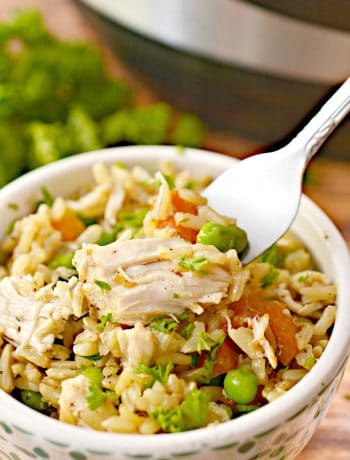